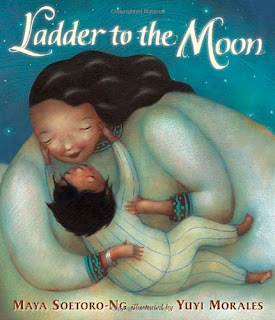 Ladder to the Moon is written by Maya Soetoro-Ng, who is President Barack Obama’s sister, mother of Suhalia, and daughter of the late Stanley Anne Dunham, the last two who are both main figures in the text. Ladder to the Moon is a book a bout questions, answers, and also about closure.

Grandma Annie and Suhalia are “separated from each other by breath and years,”as Soetoro-Ng explains. Ladder to the Moon reflects the real-life situation of Maya Soetoro-Ng and a question that arises from young Suhalia: “What was Grandma Annie like?”

This book takes the reader on a poignant journey where emotion, comfort, and appreciation is wholly intertwined when Suhalia is visited by Grandma Annie through a dream, and is taken to places and shown the caring, comforting, and soothing figure that watches over her and others across the world. They look after others and through an appreciation that clearly reflects her afterlife, cultural tolerance, and cultural understanding. Grandma Annie’s cross-cultural appreciation and cultural understandings, which was an influence in the lives of those around her, is clearly reflected in this text, that is also filled with love and adoration.

The story uses childhood curiosity to show that looking beyond traditional explanations sometimes offers the most unique and special way to celebrates life and to celebrate death. The story of Grandma Annie, who was an anthropologist in the physical, and whose love and respect for culture and humanity that was in this realm carried over to the next. Maya Soetory-Ng integrates the physical and the spiritual, allowing us to travel to places where only dreams can take us.

This is the first children’s book that has ever made me cry. The tears began when grandma Annie first appeared before Suhalia and they didn’t stop, not even after reading the conclusive piece at the end. Maya Soetero-Ng’s mother was a cultural anthropologist, which itself makes me drawn to her story, and lately I have read a few articles about her life as a researcher, mother, and a young woman. I initially thought Ladder to the Moon was focused on her physical life, but the portrayal of her afterlife is an amazing display of comfort and consolation in this perfect dream.

When my mother passed away, I had that same feeling — If I were to ever have children, I would come to the point of explaining to them this wonderful woman who was no longer with us, and longing for them to know her. To know of her. I also understand when children question this, and it touches me even more. I am so happy I had a chance to read this.

Maya Soetoro-Ng reads from Ladder to the Moon

Thank you, Candlewick Press, for providing a copy of Ladder to the Moon, for this review, and I have an additional copy for giveaway. At this time, this giveaway is open only to participants in the United States due to shipping issues.  Leave a comment on this post by next Tuesday and it will count as your entry. All names will be entered with a winner selected at random via random.org, and announced in next week’s blog post. Leave your email address with your comment: yourname(at)emailserver{dot}com, net, etc. Winner please respond within three days or another will be selected.