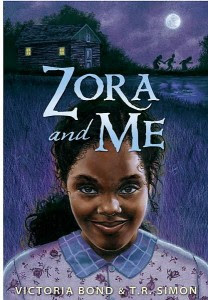 Zora and Me, is written by Victoria Bond and T.R. Simon, and is the fictional story of Zora Neale Hurston’s life as a young girl growing up in her hometown of Eatonville, Florida. The story is narrated by Carrie, the best friend of young Zora.

Of the most amazing things about this text is that it was written by an anthropologist and creative writer — who could not have made a better team introducing us to the childhood Zora, since the actual Zora was an anthropologist, literary writer, and folklorist. As readers, we imagine ourselves playing along and getting to know this young character so many have come to respect and adore.

Zora and Me takes adult admirers of Zora Neale Hurston to a place were we probably don’t allow ourselves too often,  but it’s ok, since reading about a child that so many admire as an adult is welcomed and encouraged. For those familiar with Zora, this work of fiction adds to our imaginative and fondness, as Zora’s interests and culture are weaved into this text.  and for those not yet familiar, you can’t walk away not wanting to know just who she was and continues to be.

Through her childhood relationships, imagination and curiosity, Zora’s childhood-to-life reinforces our fondness of her, putting us in a place where we find ourselves imagining being along on these these adventures, at the Blue Sink, outings, and you could hear her Southern accent as the story was being told, but then you again realize this is a children’s novel. a Zora many have probably never thought much about; one who skips rope, has a huge imagination,  Zora and Me displays a very realistic These authors as a right of passage, recognizing racial division.

Of course you don’t have to know who Zora Neale Hurston is to appreciate this book — and I’m sure if Zora was around, she’d even appreciate it herself. I can only imagine the impact the real Zora Neale Hurston made on others around in her life even as a child. I think of the legacy she left, and how she continues to shape so many of us in different areas. I’m sure there’s a reason this is the only text endorsed by the Hurston Estate.

I couldn’t put this book down! I felt like a kid again being drawn in by the imagination of this child, and felt concerned with the things that concerned her. The story of Mr. Pendir being a gator was one of the funnest things I have ever read, and believe it or not, I still can’t get the song from the jump rope scene out of my head:

“I saw Pendir with a gator snout

“I’m so happy I read this text, and it really gives me a greater sense of fondness towards Zora Neale Hurston, meaning even though I already know and admire Zora’s work, reading a text that could potentially give us some history of her life as as a child and what shaped it is excellent. Also, a young, Black female protagonist. . .  it actualized the place of race in her young life — where many Folks Of Color can relate. Many, many thanks for this, Victoria Bond and T.R. Somon!

Thank you, Candlewick Press, for providing a copy of Zora and Me, for this review, and I have an additional copy for giveaway. At this time, this giveaway is open only to participants in the United States due to shipping issues.  Leave a comment on this post by next Tuesday and it will count as your entry. All names will be entered with a winner selected at random via random.org, and announced in next week’s blog post. Leave your email address with your comment: yourname(at)emailserver{dot}com, net, etc. Winner please respond within three days or another will be selected.

One thought on “Book Review + Giveaway :: Zora and Me (Closed)”