In 1984, Onnie Lee Logan gives the oral account of her life of nearly 40 years as a traditional midwife, to an Alabama University English professor named Katherine Clark. Thankfully, for anyone who is interested in learning about the historical account of a woman whose family lived a relatively comfortable economic life despite others around them, at a time when racism and legal segregation remained overt, Motherwit provides an exceptional account.

Motherwit: An Alabama Midwife’s Story, is not so far unlike other historical accounts of lay midwifery in the 20th century, when the practice was on the cusp of banishment. But unique in its own right, it is the voice of a woman who had a desire to share her story because she ‘don’t want to bury em’ — the decades of vast amounts of knowledge and experience that comes form catching hundreds of babies, because ‘There’s too much that I don’t want to die with.’ This inspirational story tells the exceptional account of Ms. Onnie Lee’s Beginning, Tradition, Vocation and Motherwit. Through an excellent recapture of the Southern drawl and sentiments of this of this midwife, by Katherine Clark, Onnie Lee’s story begins by telling of her life growing up in Sweetwater, Alabama, in the early 20th century, the 14th of 16 children, born and raised on a farm, living a relatively comfortable life, despite the conditions of the community around her who lived in the throws of poverty.

Traditional midwifery had already come under scrutiny when Onnie Lee began practicing, due to the high rate of maternal and infant mortality in the U.S., which Black women and Black babies were not the ones largely affected from this. Black midwives had exceptional success with birth. Onnie Lee herself, only saw one stillbirth, yet midwives were required to carry permits, until the practice was officially outlawed in the state in 1976. Onnie Lee continued to practice until the early 80s. Within this time, she delivered countless babies, to mostly poor women, as well as assisted medical professionals.

Like the majority of other granny midwives from the South, a major theme of Motherwit, is the role religion played in molding her, and was the central component in guiding and shaping Onnie Lee. This tradition is underscored in her everyday life from childhood on. God remained the central guiding force and she’s “just using the hands God gave me.” Onnie Lee says her skills came from her ‘motherwit,’ which was common sense she received from God, and gives me the impression that without the level of faith, there may not exist a granny midwife or a text about her life.

Although Motherwit is not necessarily a text geared directly towards discussing racial politics specifically, racism and state-sanctioned legal segregation that denied Black women access to white hospitals, was the reality in this U.S. region, and where Onnie Lee ‘Never saw a white doctor deliver a Black baby.’ Embedded, however, are the issues of economy, racial segregation and class division, in this story that speaks of life in a rural village and the implications of Blackness for the the protagonist, who isn’t exactly sure of her birth because ‘in those days they didn’t really keep an accurate record for black people.’ Moreso, it provides the practical account of this third-generation midwife — after her mother and paternal grandmother, and tells of her service, patience and sacrifice.

In addition to providing 70 years of remarkable story-line on childhood, womanhood, being a birth companion, and subsequently a professional, what makes Motherwit exceptional is that this account of Onnie Lee’s life and career, told through this first-hand account, is absent of elitist attitudes on questioning if the use of her (in) ‘proper language,’ should be used in the text, or left as is — like many other authors who narrate texts. Instead, Katherine Clark excellently conveyed her mannerisms and Southern Alabama drawl to such an extent, where I often felt as if I were listening to my grandma.

It is not possible to understand the current state of contemporary childbearing, without having a knowledge the history and the implications behind what led to the current state where hospital births surpass traditional home births. Motherwit is an exceptional addition to lay and professional midwives and other birth and healthcare professionals, for those who wants to learn practical methods of birthing, or more simply what life was like in the South, as well as anyone who is interested in history and the conversation of race and racism and the embedded politics surrounding those issues. In my opinion, everyone should read Motherwit, because we are all in some way impacted and this history is just as important to all of us as it was to Onnie Lee.

Onnie Lee’s remarkable story is one that I know is inspiring countless people today. It is remarkable not only because of her wisdom and insight, but because of the passion she brings with it, and the rich account of history she offers.

I wish she would have talked more about breastfeeding as a custom. The only mention was in the initial chapter when she discussed the co-nursing relationship between her mother and the white neighbor when one needed to run into town. But even with that absent, Motherwit is  remarkable reading. 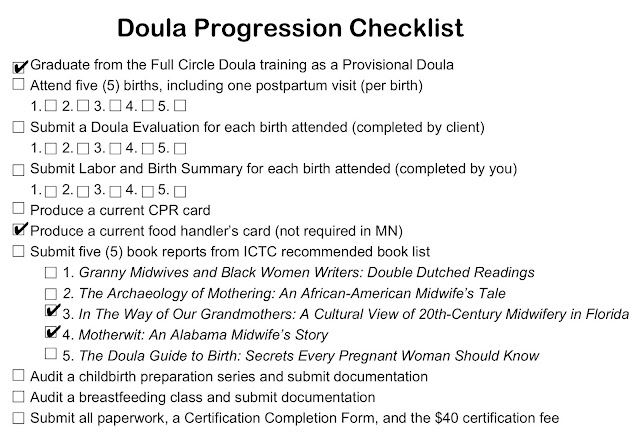 This text was not provided by the publisher to review on my site. It was purchased with my own funds, as part of Doula Certification, which requires a written review and submission of birth and midwifery texts. This post is here simply to share this report/review with my audience.