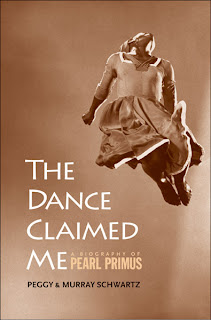 THE DANCE CLAIMED ME: A BIOGRAPHY OF PEARL PRIMUS, is written by professor of dance, Peggy Schwartz, and Literature teacher, Murray Schwartz, who are well-qualified to write on behalf of this icon, since their personal relationship with Ms. Primus, meeting her at the University of Massachusetts, is what prompted this story of her life. In it they tell of a phenomenal woman, whose determination to impact those around her was unveiled unshaken.

Peggy Schwartz recently said everyone should know of Pearl Primus’ life, which is what this husband and wife duo set out to do, as they gathered stories from friends, acquaintances and of course drew from their own precious memories to construct this timeline. They share pictures and images from their own personal collection as well as others, showing Pearl in childhood, in dance, and throughout various sectors of her personal and private life.

This text is carefully crafted and arranged in a chronology that takes us on a journey from Pearl’s birth in Trinidad and Tobago through her childhood and family’s migration to New York, her education and influence, trips around the world and finally her death and “Return to Sea.” THE DANCE CLAIMED ME also allows readers to almost feel the rhythm in Pearls dances and the beautiful, grueling dance rehearsals.

But Peggy and Murray both show us that Pearl Primus was more than simply a woman on stage, through garnering such respect and making such an impact that rendered her powerful — at least enough for an investigative launch by the FBI, even as she continued to face difficulties that included having her body stigmatized and told on several occasions it just wasn’t the correct type, and a fascinating gender switch, allowing her to dance in a specific culture.

THE DANCE CLAIMED ME: A BIOGRAPHY OF PEARL PRIMUS is without a doubt certain to impact women, Black women, anthropologists, non-anthropologists, dancers, and countless others.

I had trouble writing this review. In fact, it was difficult, and has been the most challenging reviews I have written so far. To try and extract what I believe the most relevant and intriguing information to bring to my audience, was complicated. Pearl Primus (November, 1919 – October, 1994) had a fascinating life. In her brief 74 years she managed to accomplish what some could not in two, maybe three lifetimes. And looking at what she did and how she did it only adds to the sense of wonderment felt towards her. Secondly, Pearl was a perfectionist. In her dance and form it must be one hundred percent in her dancing, even refusing to allow their duplication if the exact inflection could not be extracted and conveyed by dancers. Finally, it would be cruel to view the life of Pearl Primus, astonished by her many adversities and enthralled with her accomplishments and label her another “Strong Black Woman”. Yes, that would be at the very least tragic, which may be the reason I began this book, read half-way though and set it down, only to return to it some time later.

I didn’t know much about Ms. Primus before I read this text. The limited amount I did knew came as a result of moderating Black Feminist Anthropology’s Facebook fan page where, after searching for articles to post, came across information, but it was still very limited. As Johnetta B. Cole spoke of looking for other Black women in the discipline, our “Sheroes,” I knew what she meant. But if it wasn’t enough to find a Black woman in a discipline where our numbers are few, there’s a feeling I get when I learn of someone who puts forth such an effort to positively impact society. This feeling is intensified of course, when this person is a mother, an academic, a world traveler, an influence, a teacher, “Grandmother of Black Dance”, while still to many remaining an enigma.

Dance is my medicine. It is the scream which eases for a while the terrible frustration common to all human beings who, because of race, creed, or color, are “invisible.” Dance is the fist with which I fight the sickening ignorance of prejudice. It is the veiled attempt I feel for those who patronize with false smiles, handouts, empty promises, insecure compliments. Instead of growing twisted like a gnarled tree inside myself, I am able to dance out my anger and tears. 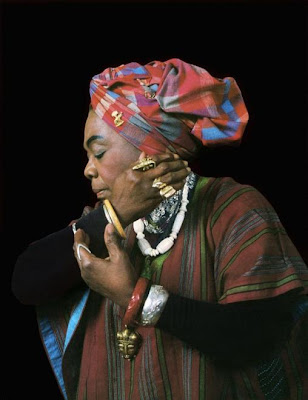 Dancing is not a luxury. It is a weapon. In Pearl Primus’ case, against injustice and to produce more cultural awareness and understanding. Pearl Primus has a remarkable story; one we may not have heard had it not been for so many willing to share their memories, and for two friends who obviously care a great deal about her. To reiterate Peggy Schwartz “Everyone should know about her life!” And I agree. Pearl Primus is a Shero! One who has not only transformed anthropology, but academia, dance, culture — lives. And while I criticize the racism that hindered her from pursuing her initial dream of becoming a medical doctor, I wonder if she would have touched lives the way she did. I am thrilled to be part of a discipline where such a woman preceded me; uncompromising in her beliefs and unyielding in her efforts and determination. And as I aspire to add my contribution towards a great level of justice I can only hope to be as impacting as someone who said “I dance not to entertain but to help people better understand each other. Because through dance I have experienced the worldless joys of freedom, I seek it more fully now for my people, and for all people everywhere.” I am thrilled to have had a chance to learn more about her through this text!

Thank you, Yale University Press, for providing a copy of THE DANCE CLAIMED ME: A BIOGRAPHY OF PEARL PRIMUS, for this review.