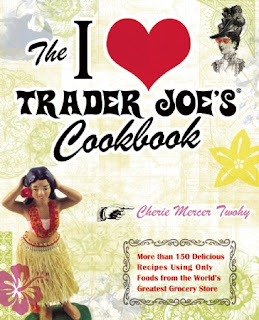 Cherie Mercer Twohy, is a graduate of the California School of Culinary Arts, and can be thanked for not only creating a Trader Joe’s genre of cookbooks, but  for also bringing us other titles in the category, including the I Love Trader Joe’s Party Cookbook, and the I Love Trader Joe’s Around the World Cookbook. This owner of Chez Charie Cooking School in La Canada, California, briefly discusses the inception of these texts that stemmed from dinners with friends and those questions of admiration, to having “shop alongs,” helping these same people figure out what to buy when in the store together, to a course on the subject, to printed copies of texts — one that I have here in front of me.

This author who really does love Trader Joe’s has even dedicated a section in the book detailing her admiration titled “How Do I Love Thee, Joe? Let Me Count The Ways:, and talks about everything from always being able to find something new, to happy and enthusiastic employees, celebrating the ways food items are displayed, fair prices, the outdoor floral section and a few others, too, and her Trader Joe’s cooking classes, which was inevitable, is according to her website, “Always popular, often sold out.”

The only issue I had with The I Love Trader Joe’s Cookbook was that I didn’t find it sooner! I never knew there was such thing as a text dedicated to what is quite possibly my favorite store in the whole wide world, and when it arrived I was in just too happy. The only problem I’ve ever had with Trader Joe’s is I fall in love with something (like Spicy Thai Peanuts) then they’re gone, which is something I appreciated about this book that shows how to substitute and what with. I also really enjoyed how the book is organized and definitely liked the selections I made, which are shown below. I was even surprised that one recipe called for frozen garlic cubes — something I never even knew existed?

I found the dishes were easy to make, but for some strange reason my receipt showed this meal cost more than would have thought, and I ended up spending more money on what I made than I ever would have guessed, which made me scratch my head, since one of the things I have always admired about the store is the reasonable prices. But the dishes were easy to make, and didn’t require a long prep time, and although I didn’t have to substitute food ingredients, the Blackberry Fool called for a food processor, which I didn’t realize was broken until I brought the fruit home. My sister’s hand mixer almost worked just as well. Actually, no it didn’t — having a food processor would have been much nicer, but I’m thankful she had a mixer because it was definitely better than nothing.

I’m not a meat eater, but this recipe sounded delicious and I was right. Keep in mind that the salt and pepper is definitely needed, though, and the freshly grated Parmesan cheese topping the dish definitely added to the flavor. But this was also the first time I had ever tried leaks, and though it probably looks like much more than it is, the recipe only called for two of them — thinly sliced. Next was the 1/2 pound of shrimp — TJ’s didn’t have fresh, so fresh frozen was the option, 1-16 ounce bag of linguine, olive oil, butter, cubed frozen crushed garlic, vegetable broth, 1/2 pound medium shrimp, a handful of arugula, and then of course, the 1/4 cup freshly grated Parmesan cheese and salt and pepper. 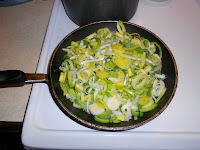 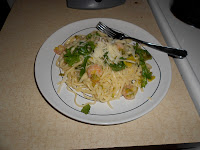 2. Green Beans with Red Onion and Creamy Feta Dressing
Looking back I would have changed two things: First, I would have mixed the green beans more with the Feta Dressing, and since I didn’t really understand the onions at all, I would have left those out — which is what I will do next time. But I would not have occurred to me to mix some crumbled feta cheese, lemon juice, plain yogurt and black pepper. 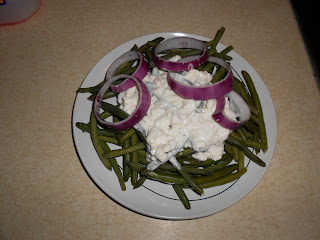 I almost never add sugar to, or ever make anything that requires sugar, but the Blackberry Fool from the “Desserts” chapter is the exception. The recipe is so simple and calls for one pound of blackberries, 1 and 1/2 cups of heavy cream, 2/3 cups of sugar and the squeeze of lemon juice. Process the blackberries and lemon, mix or whisk the cream and add the sugar to the mix. My sister and I were so excited about these and ended up loving the taste and creamy texture so much we decided to try and make other ‘fools’ with different fruits and strawberry, melon and banana are just a few on the list so far. 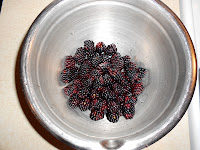 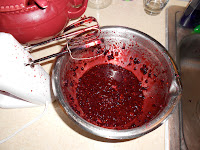 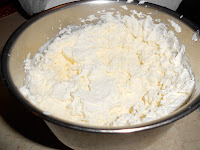 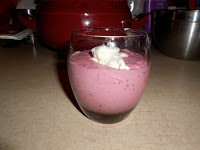 I’m really excited about this cookbook, and know I will constantly use it for meals, snacks, salads and many other things. I’m so thankful for having the opportunity to review this text.

This video is not an official commercial, but since it was on the author’s website as their “Favorite Trader Joe’s Commercial that will never be made,” I thought it would be nice to also place it here.
Author: Cherie Mercer Twohy
Publisher: Ulysses Press
Year: 2009
Paperback: 17.95
Genre: mmm bites/Trader Joe’s
Pages: 224
ISBN: 978-1569757178
Thank you, Ulysses Press, for providing a copy of The I Love Trader Joe’s Cookbook: More than 150 Delicious Recipes Using Only Foods from the World’s Greatest Grocery Store, for this review.
Note: All opinions are my own and honest, and I am not compensated by the publisher!