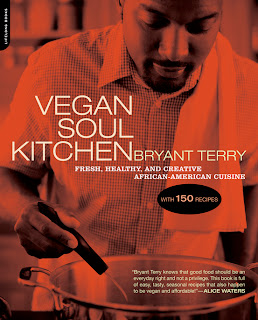 Bryant Terry believes a plant-based diet can be beneficial in health and social justice, and encourages readers to make an attempt at this, while sharing the ideas from a book that he says is not health, but “Real Food.” In this text he explains the inspiration for these recipes stem from his Memphis, Tennessee upbringing and world travel, with dishes centered around traditional African cuisine, which are reworked with “African, Caribbean, Native American and European staples.”

Each recipe in VEGAN SOUL KITCHEN is easily described, crafted with care and lists a music and art selection, along with a small autobiography. VEGAN SOUL KITCHEN is not a text that requires an extensive knowledge of culinary arts (whew), and offers ideas that are pretty simple and easy to implement.

When I was growing up, holidays were not holidays without soul food, and I always anticipated the moment dinner was done and mustard and collard greens, hot water bread, fried catfish, baked turkey, my grandma’s dressing, okra, banana pudding, sweet potato pie, and lemon cake arrived at the table. I haven’t had that food in a while, but I can almost smell it now. But even when I removed meat from my diet for nearly10 years (vegan for a short time), it never occurred to me there was any such thing as vegan soul food (And apparently I wasn’t the only one who thought this)! So I was both surprised and excited to find this book!

In mid 2011 — June, I embarked on a conscious-raising endeavor by returning to a plant-based vegetarian diet. My thoughts and reasons for returning to this lifestyle were much different than in previous years, and my efforts to look at food and social justice — food justice, as it relates to access, the environment, and cross-cultural awareness were at the forefront. And of course examining these through a holistic viewpoint was unquestionable, even while exploring this text. But often when I hear the words ‘food justice’ and ‘vegan’ in the same sentence, I tend to get a bit skeptical. OK, I tend to get a lot skeptical! I don’t think my skepticism is unfounded, since in my opinion, it seems that folks talk about the idea of “eating towards justice” but fail to recognize or to acknowledge the role social inequality plays in access to these resources and lifestyle they promote — so this food justice, in my eyes, becomes “Justice for who?” Although this text was not filled with full segments on these topics besides some brief information before the recipes, my initial appreciation for Bryant Terry’s approach came before this book even arrived — through a brief conversion via Twitter, where he, (@bryantterry), acknowledged that food choices and practices are not a “one size fits all” approach, when I decided to share some of my thoughts along with a bit of that skepticism on food choices, cultural traditions, social inequality and how all of that relates to exactly who is eating what.

From what I have experienced, it is rare from someone who promotes a plant-based lifestyle to look at more holistic circumstances. It seems more often than not vegans display a linear outlook, and outside experiences are not too often taken into consideration; too many too often disregard the differences in perspectives, capabilities, cultures. Bryant Terry’s explanation allowed an appreciation for his relative standpoint, recognizing people and their experiences vary — “No single way of eating is perfect for everyone.” He also acknowledged that although in some cases a vegan diet has been shown to be beneficial in health and social circumstances, it is not everyone’s ideal and definitely not a “fix all” approach to the many social and health disparities that exist. VEGAN SOUL KITCHEN encourages readers to fix this up in their own way, even adding meat products if they desire — something I may have done if I was a big meat eater, but I’m not.  And even though I wanted to try just about every dish, I didn’t, and I also stuck to the original recipes for a lovely, what was called in a restaurant I once work in, “Soup, Salad, and Bakery,” followed by an awesome dessert. But I couldn’t help starting with something from the “Sound Bites: Appetizers. Starters. Snacks” section, and although I put the name of tracks that were recommended with each dish in this review, I must admit Tracy Chapman was playing most of the time I was in the kitchen!
Black-Eyed Pea Fritters w/Hot Pepper Sauce
Soundtrack: “I.T.T., Pt. 2” by Fela Kuti from The Best Best of Fela Kuti

The instructions are to soak the peas overnight, and agitate them while submerged in water and allowing the skins to rise to the top. I would really love to get some advice on that because that did not completely do the trick over here, though when I think of it the next day the peas were no longer completely submerged in water, so that could have been the culprit. But I doubled this recipe, which calls for one cup, so as you can imagine hand-skinning all of those individual peas was no joke! It was a grueling task that seemed to take forever, but with a little help from my sister, I traversed! I think I got a little excited with these and accidentally added the orange pepper (instead of green) and the cornmeal to the mix before processing. Fortunately things worked out! 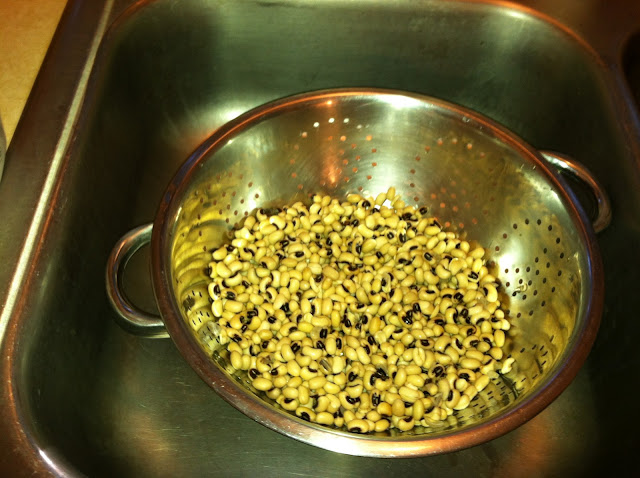 Uncle Don’s Double Mustard Greens and Roasted Yam Soup From the section “Top Six Good Eats: You Gotta Remind Me” (Because you must make at least one of the author’s favorite dishes)
Soundtrack: “I Can’t Stand the Rain” by Ann Pebbles from Brand New Classics 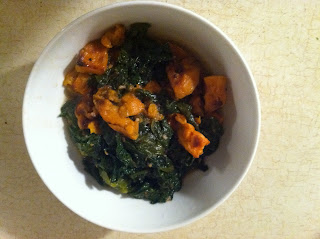 Soundtrack: “Relax Max” by Dinah Washington from The Swingin’ Miss “D”
From the chapter “Mix Plates: Salads. Slaws. Dressings”
Sweet Cornmeal-Coconut Butter Drop Biscuits
Soundtrack: “Turn Left” by Little Dragon from Little Dragon
From the chapter “Daily Bread: Biscuits, Cakes, Cornbread.”
Even when they were in the oven, they smelled like they would taste heavenly. And I was right! Though my only critique is the cornmeal — I could really feel the hard particles when I chewed, and I’m sure I followed the instructions, so I’m still wondering about that. These flew off of that plate faster than I have probably ever seen anything EVER! And on the night I made these, I put my 6-year-old nephew to bed and while doing so (I didn’t even mention these biscuits, btw), he asked if he could have more in the morning. That says a lot!! 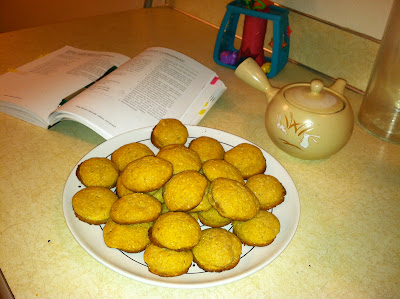 Lavender Lemonade
Soundtrack “Lavender Woman” by Nat Adderly from Live at Memory Lane
From the chapter “Hydro Game: Drinks”
I really enjoyed making Lavender Lemonade! I love with all things lavender but had never actually had a food product made from it. The subtle hint of the herb made it just enough to make this an exquisite drink, but I would recommend adding just a tad more simple syrup than the recipe calls for, and according to my sister, leave the wedges out of the final batch since to her, it made the mix sort of ‘rindy’ tasting when the lemonade was refrigerated overnight. But everyone was so impressed with this and talked about it days later! 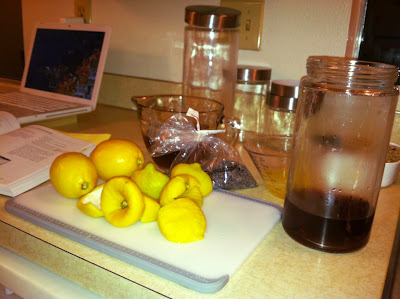 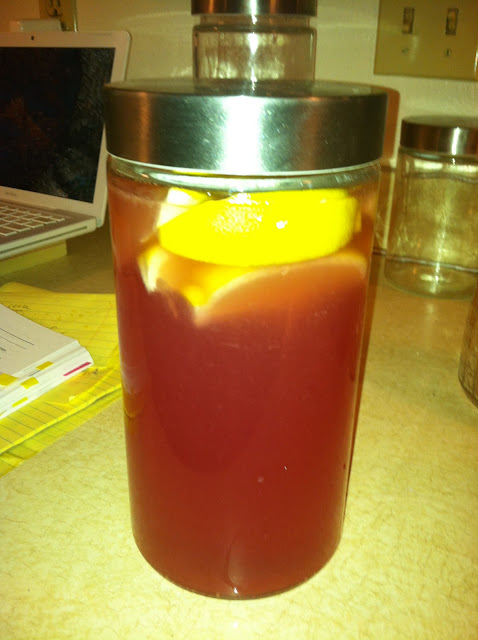 And a yummy treat, of course. Chocolate Pecan Pudding Pie
Soundtrack: “Pillz” by Jaylib from Champion Sound
From the chapter “Sweet Thangs: Desserts. Candies. Ambrosial Treats.”
Social consciousness without fundamentalism, along with recipes that are not only easy to make, but often with ingredients that are usually in my kitchen means I have no ‘beef’ with this book.  Pun intended! I am so happy for the chance to have explored this real cookbook — filled with delicious “Bright, Bold, and Sexy Soul Food,” and I can’t wait to cook from his other texts.
Author: Bryant Terry
Publisher: De Capo Press
Year: 2009
Paperback: 18.95
Genre: Nutrition/Cookbook
Pages: 256
ISBN: 978-0738212289
Thank you, De Capo press, for providing a copy of VEGAN SOUL KITCHEN: FRESH, HEALTHY, AND CREATIVE AFRICAN-AMERICAN CUISINE, for this review.
Note: All opinions are my own and honest, and I am not compensated by the publisher!