Lately, I’ve been thinking quite a bit about the boycott on Nestle and what it means when such measures against a company have lasted for so long. If you’re unsure about this boycott that was launched over 30 years ago, let me give you a very brief history, but you can read more about it here, here, and here.

In the late 1970s, a boycott was launched against the corporate giant, because of their marketing of synthetic infant formula — advertising their milk as superior to mother’s as all infant formula companies do, of course. But using varied marketing tactics is nothing new and is something we face often since we are daily bombarded with ads and various outlets that tell us how much we suck without their products, which makes us feel inadequate, so we spend and spend and spend because the more we have the more we feel we are worth, and this veneer enables us to feel more accepted into society. But I digress. The issue with Nestle was/is these tactics continue to be used in developing countries where natural resources — more specifically, clean water is inaccessible, the literacy rate is low, and breastfeeding is literally a matter of life or death for many infants. That along with other disparities in these areas that largely have Populations Of Color, including lack of access to health care, an overwhelming system of inequality, and  male figures dominate and female contribution and input is largely undervalued (believe it or not I’m not talking about the U.S.) and the equation looks something like this:

And that is just the beginning. 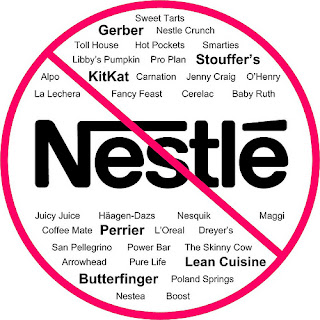 I’m not here to write everything I know about the boycott — the links above provide a very good analysis of this, and you can also conduct your own research as well, which I hope will be the case. But my concern is why is Nestle, despite such long and wide opposition, still one of the largest corporations that exists, with such a large level of corporate authority that they are fully capable of continuing, without reprimand or ramifications, and still refuse to  comply with the World Health Organization’s (WHO) International Code of Marketing of Breast-Milk Substitutes?

What’s wrong with this picture?

When the citizens of Egypt decided they would no longer tolerate a corrupt government run by tyranny, plutocrats, and other ill practices,  they mobilized and took action. And in many ways the rest, as you know, is beautiful and wondrous history that gives me chills right now as I write this. What an amazing display of community action and desire for social change. A true revolution!

I don’t have all of the answers, but I am concerned that we have become complacent, and this complacency is the free pass for companies like Nestle to continue these ill-practices. How are we compliant with Nestle’s strategy? Seems that to just slap a boycott and call it a day has become the norm, without taking a real in-depth look at what lies below. The foundation must change.

If you are unsure of your position, but are interested in knowing ways to counter these practices, here are a few ways to start:

As stated these are only a few ways we are able to voice our concerns and show our intolerance towards the genocide launched by corporations and their use of unethical practices directed towards our sisters and brothers in any region. But we must become involved in order to begin to see the global situation change — with perseverance and collective action, or we’ll be here in another 30 years singing the same tune — instead of recalculating the equation to look more like this: