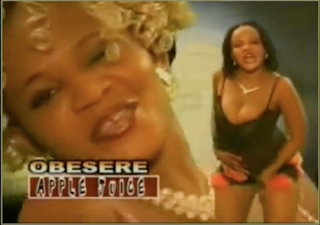 I’m not exactly sure about this one but from what I’ve grown to know, lingerie and other ways women move their bodies while touching their breasts is considered sexy — sex appeal to another person. And having a male figure around often contributes to that message, like we have here in this Nigeria Obesere Obuntun Breastfeeding awareness video. But I’m not sure exactly what the male figure’s role is either. From where I stand, I would see this as portraying a message about breastfeeding and sex appeal, that goes something like this: this woman is sexy and desired by this man. Breastfeeding is important, so if you breastfeed, then you are sexy. Maybe. But that’s just my interpretation, and I’m not sure how relative this is to Nigerian culture, or to this video that is intended to raise awareness around the importance of breastfeeding — and posted by a YouTube user’s channel that aims to promote African music in the U.S.

I’m wondering if this is a commercial for the brand “Oberese,”  since that appears on the screen a majority of the time, or if it’s something representing what many of us in the States know as WIC (Women, Infants, Children), since the words “Apple Juice” appear several times in the background and they’re trying to also get the message of nutrition across to their audience. There is also a huge significance with the main character wearing a blond wig, which to me sends the message that one must mimic white culture to have a certain appeal or to get this message across, and that leads down the path of discussing more politics, of course, which I ‘m always open to doing. But I could be wrong.

I wasn’t able to make out everything from the small bit of English spoken during this song, but here is just the bit that I could, and of course the blank spaces are parts of a sentence with words I couldn’t:

“Hey, young mothers, give a child a try. Let him you feed on your breasts. Breastfeeding for healthy and wise kids.”

“Why you want to struggle for your ________ now. Grow up healthy and strong” Breastfeeding ____ essential for healthy children.”

“Young and old mothers, breastfeed your child and you will grow strong and healthy — just what God created.”

These are just some early thoughts, and if I had the lyrics things would be much clearer, I’m sure. Maybe I’ll do some more research or try and find a translator. I’ll post any updates I find, of course. But how do you take this video?