I can’t explain how thankful I am for coming across the video below. It allows me to explain more in detail about what I mean when I say that breastfeeding is not just breastfeeding. It also is another way to view why Breast Is Best just won’t work, and if we want to truly increase our level of participation and promote liberation and self-empowerment, we must get to a point where we explore other areas that are at the center of lowered rates.Megan Carney, who appears in the video, is a professor of anthropology at the University of Washington. She focuses on the political economy/ecology of food, on critical race and other social theories. I found this video where she explained Food Security vs. Food Sovereignty, telling us that the vast difference between the two lie in accessibility, production and power. Food security, she explains, though people may have enough, have adequate access and it is made safe and affordable, this type of structure remains infused with governmental policy, political control, and is weighted in favor of authoritative figures. Food security does not take into account the differences in the way people view and acquire food — through a culturally specific lens, but its purpose is to fill bellies. Food sovereignty on the other hand, is concerned with working towards recognizing members of various groups and the community as a site of empowerment, agency and mobilization. Food Sovereignty is organized by the people, and takes into account that the one-size fits all approach does not work. It recognizes the varied practices and social and cultural lenses are necessary and work more at producing the uniqueness and specificity of a particular group.

How is this connected to breastfeeding?

I think this parallels the lot of breastfeeding advocacy I see. Most, if not all messages around the topic are largely concerned with the practical aspects of infant feeding — getting a baby to suck. I feel what is too often overlooked is the idea that deeply woven into the tradition are ways at examining how people practice and how attitudes are shaped around this custom. A recent article in American Anthropologists underscored that ‘Breastfeeding involves much more than feeding; it entails intimate social interactions that reflect cultural ideas and practices about social relationships, childcare, and child development,’ and that ‘many other ethnographers have suggested that breastfeeding should be viewed not only as a health-relevant activity but also as a sociocultural activity.’ I talked about something along the same lines earlier this year at the ROSE Breastfeeding Summit, and encouraged the audience that in addition to advocating the tradition to Black women in the community, to take a more critical and holistic look at what lies at the center of lowered rates — especially cultural insularity, apathy and others, and recognize the need for more engagement from all people.

In the same context of security, and even though most disagreed with me about not looking to celebrity icons for breastfeeding support, I felt very strongly about this when the world all but praised Beyonce’s public nursing. I know that to many people, it was seen as a significant achievement for Black women and especially, as some said, to ‘Black lactation activists’. The social networking sites blew up with tweets and posts about this ‘monumental moment in history’. Those looking for a Black diva-esque-type role model — a non-crunchy sistah, believed this representation would fuel a breastfeeding revolution in our community. I understand it’s a sensitive area for so many working to save the lives of Black women and children, which is why I have and will continue to approach this area with sensitivity. I’m happy to know Beyonce breastfed whenever and for whatever amount of time, but in my mind, not only did it I feel that leaning towards this type of representation only contributes to the hierarchy and reproduces the cycle of domination in a society concerned with constructing protagonists just to advance a system based on greed and self-interest, but the sentiments around Black women’s breastfeeding just wouldn’t last. What happens when the novelty wears off, or her popularity declines, just as starters? This is also seen, I believe, with many other entities that do not take into account the varied cultural languages or the lens of the people. It remains top down. The issues are, of course, much larger, and go much, much deeper, but this is an example of how we remain fixated on power structures instead of engaging our local groups to find out exactly what breastfeeding means to them. What does breastfeeding mean to different groups in language, culture, custom, religion and various other ways of trying to understand. A one-size-fit-all approach is detrimental.

Empowering people to understand the need for more community and cultural involvement, and work at the foundation of issues within and outside of breastfeeding towards a real social change, is what will move us in a direction where our efforts will transcend generations. We must make a true, concerted effort at dismantling issues of power, challenging cultural insularity, inequity many others, in order to progress and move forward. And get to know somebody! Understanding others and working together to confront systems of domination needs to be the goal of all advocates, lactation specialist and anyone interested true social equality. Everything else, in my mind, is not a marker of transformation and liberation, but is just a game of follow the leader.

Ya, so I don’t really know how to cook well and all, but obtaining a food handler’s permit is still a requirement so I got one. I had no idea where to go at first, until my friend told me I can get one online. I visited the Washington State Department of Health, and enrolled in the short course which largely consisted of watching animated slides on how to safely handle food in order to avert bacterial contamination, followed by taking a 32 question quiz and paying the 10 dollar fee. The card lasts for two years. I also got a new book — In The Way of Our Grandmothers: A Cultural view of Twentieth-Century Midwifery in Florida, which I’m reading now and plan on reviewing as well as submitting as a report, and I’ll it check off when complete. 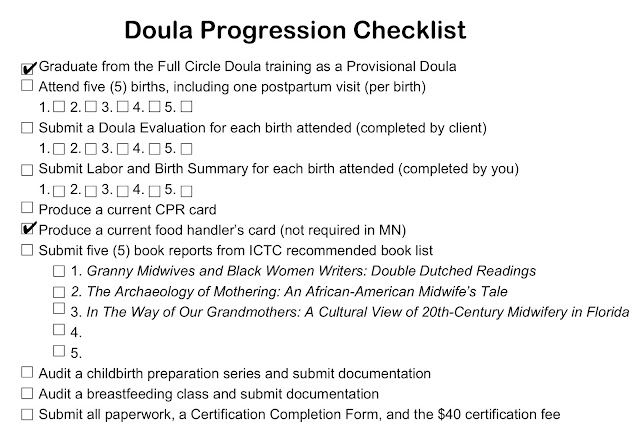