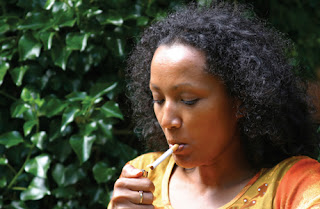 Since I still have many of the ideas from the ROSE Summit fresh on my mind —  hearing all of the ways organizations, healthcare officials and advocates work to increase breastfeeding rates among Black women, I decided to google some of the speakers so I can take a deeper look at their work. I came across this recently-made video featuring Dalvery Blackwell, who is a Board Certified Lactation Consultant, and co-founder and program manager of the African American Breastfeeding Network of Milwaukee, and found it helpful.

In it, Dalvery encourages finding ways to stop, or at least lessen smoking, and explains a few ways to minimize second and third-hand smoke around babies, and talks briefly about bottle-fed babies whose mothers are smokers. She also explains that although quitting is ideal, a woman who smokes up to 10-15 cigarettes per day passes minimal amounts of toxins into her milk, and breatfeeding still produces the optimal effects for a newborn baby and provides a level of protection against ailments even smokers get. Crazy, eh?! I thought her scientific explanation was helpful and necessary, since this is something that is not too often discussed. She even goes on to give a short account on her own connection with tobacco — on how she started and how she stopped, and those are always nice to hear.

As a former smoker myself (last month, I celebrated three years of being smoke-free, after a very long and drawn out 15-year habit), I understand what it’s like to struggle with tobacco — and the desire or the non desire to stop, as well as the difficulties that come with it. As I’ve mentioned before once upon a time when I saw myself with kids figured I’d just stop when I found out I was pregnant, though looking back I’m not exactly sure what it was that possessed me to think I’d be able to kick the habit at the drop of a hat, since most times being able to quit seemed simply impossible. Cigarettes are exceptionally addictive. Of the many reasons behind my quitting, which include being a positive example for my family members — the younger generations especially, wanting to increase my health, learning about the history of slavery and tobacco, gaining a greater understanding of the industry whose predatory marketing tactics are largely directed at Black and Brown communities, saving myself some money and just being ‘so over smoking,’ I firmly believe the universe was preparing me for breatfeeding advocacy before I even stepped into the realm; in order to promote health among the communities I seek to represent, even though I don’t have children, encouraging me to be as healthy of a representative as I could. I am very thankful for that. But that’s just some of my story. What about you? Do you have a breastfeeding and smoking story? On quitting or continuing? Do you struggle with tobacco while having a newborn? Has it interfered with your breastfeeding journey? I’d love to know.

There are many places that offer smoking cessation support. 1 800 QUIT-NOW seems to be a number that has been implemented in several states across the U.S. Do you know of others?

5 thoughts on “Cigarettes and breastmilk: Can you smoke while nursing? (Video)”