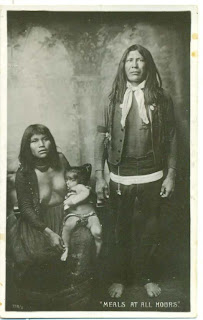 I’ve been giving a lot of thought to the Race Conference I attended a few weeks ago. This year’s theme was Building Community to End Environmental Racism, and the first workshop I sat in on was on Native American Culture. During this one titled Indigenous Wisdom (s), Traditional Ecological Knowledge, and Public Health, the main speaker introduced the class to some of the traditional culture and told stories of some of the ways the population lived during a pre-colonial era. Her lecture introduced the class to everything from gathering and using herbs for medicinal purposes to cooking and food sources. It was illuminating.

I’ve been in conversations lately — about the history of breastfeeding among Native communities, the disparities that exist and all things connected to it — like the legacy of housing misplacement, which at the very least was a hinderance, food rations that were drastically different and culturally inappropriate, which contained starches and other non-healthy ingredients that led to a multitude of diseases and ailments that we still see today. I’m far from knowing the entire story about breastfeeding culture and history among Native communities, but what I do understand is that the tool of the colonizer remains intact today.

Following the sentiments of the speaker that Saturday, there is a connection that exists — and infant nutrition is a part of that connection. For some communities, breastfeeding is more than nourishment or a way to create a bond but is a traditional food within a relationship connected with all things physical and inanimate, visible and invisible, tangible and intangible, and is the foundation of expressing culture and transcending those throughout generations. Yet the effects of racism continue to threaten the environment in many Native American communities, and simultaneously the traditional foodways of this population.

During this talk, it reminded me of Maia Bosswelll-Penc’s evaluation of environmental degradation and its connection to racism, and reminded me of some articles I had previously written on the issue of voicing Native communities and that reminded me why I even began; voice. That Native communities are among some of the most ravaged with environmental toxins at the hands of us and corporations is no surprise. These acts of violence towards traditional foodways, and cultural genocide are continuously sanctioned by our willingness to remain silent. What we put in our mouth is more than just something to fill our bellies, but is fastened with legacy, and breastmilk, like foraging salmon or deer, is a traditional food for babies.

One thought on “Ending Environmental Racism and Preserving Culture: Breastfeeding as traditional food”