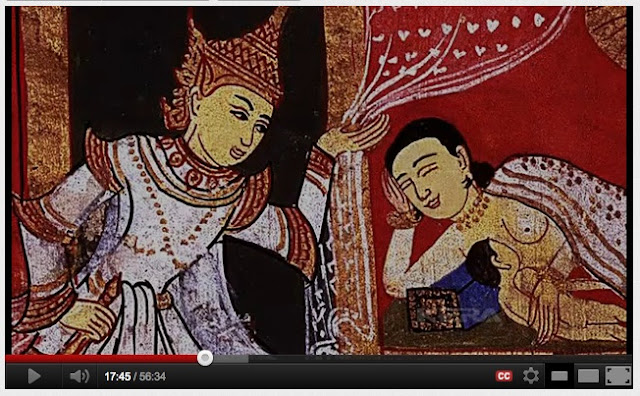 I watched a documentary on YouTube called Buddha – A Documentary About Buddhism, that showed the life of the Buddha. Among the story of his venture from boyhood and being sheltered, to adulthood and finding his spiritual path, I was surprised to find this man was married AND that he had a child! It never occurred to me to place this figure in a father or husband role before. Well, inevitably there were images of the Buddha’s family — his wife and child, Rhaul — and the part of the story right before he left everything, determining his quest for truth and search to alleviate suffering was imminent, of course caught my attention. His wife lay there peaceful with their son at her breast, as he looked upon the sleeping two just before his journey. Whether this is exactly the way things happened or not, is very powerful and telling, and of course merited me pausing the documentary and taking the screenshot that you see here.

As for the Buddha, according to this documentary his mother died during his infancy when he was just one week old, so he did not nurse from her for long, if at all if she was ill and unable to do so in the meantime. There was no infant formula 2,600 years ago when he was born, and as far as I know no other types of supplements. This got me wondering more about the story of him as a baby, and what wet-nursing was like at that time, because of course I wondered where he received his milk.

One thought on “Even The Buddha’s Son Nursed”