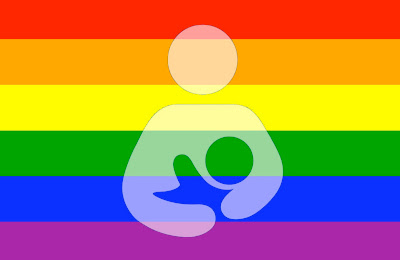 It never would have crossed my mind that trying to raise awareness around breastfeeding by calling into an internet radio talk show, would turn into an hot zone for confrontation — or that it would be a place where I’d find myself being called a ‘dyke’ or ‘ho’ in the middle of just about every other word from the room. I previously wrote in to the host and recommended a topic, since she always suggested we do so, and because I thought it would be a great opportunity to get more people to recognize the importance of breastfeeding, how it affects us all and just as crucially how we can find ways to support each other and get more people to pitch in. She decided it was a good topic, and I was very impressed when I found out she did some research of her own before beginning the program, and she and I talked for a while, while others listened in and used the chat room to talk more about the subject. And the show was going well. But of all the things that keep me awake at night, this one held me down with a special weight, and after a decent amount of crying from the intensity from everything that happened on Sunday, I fell asleep and had a nightmare, which is rare for me.

The tragedy here is that while talking about breastfeeding — the benefits to mother, child and overall society —  things were going so well. I really enjoyed speaking about why Black people need to make ourselves count in supporting breastfeeding women. And how just by doing so raises awareness and contributes to the overall health of our community — and empowers all of us. We also talked about other practical aspects, too, like colostrum, and fore and hind milk, infant formula and a number of other related topics. Things were fine! But that was all before the show went off the air and another listener called in to explain to us the reasons behind the ban on women who nurse in public, which she staunchly believed is because men — “gay men are controlling the strings in society and hate women’s bodies so much that they’ve stigmatized the act” — and the host agreed! But not only did these two women agree that gay men are the root cause of the issue, but also that “we live in a homosexual-based culture, and this is what society needs to see in order to get to the bottom of it all!” And they told me I needed to recognize that also.I won’t argue that men are at the root of public breastfeeding discrimination. That they have taken women’s bodies and continue to commodify and exploit them for sexual pleasure, is indisputable. That stance has been adopted by the majority of society to not see breasts as a site of nourishment for a baby, but for pleasure, and that we have, even as women, adopted that as truth. I won’t deny it. But I don’t really know how to take this — the gay thing. I don’t know how to put it in front of me and dissect it at all, except look at it for what it is — at face value.

Even though there’s a very big part of me that wishes I would have just left early on — that instead of sticking around and trying to change the perspective of these people by telling them that their so-called objective views on homosexuality are only perpetuating the division, neo-colonialist and puritanical views this room full of Pan Africanists oppose every Sunday afternoon I should have just folded. And even though I’ve been trying to get better about choosing exactly which battles I’ll fight, wonder what that would that have meant for me — as far as being compliant and supporting this viewpoint I feel so strongly against? But I just couldn’t wrap my brain around what they said. The society I live in denounces same-sex domestic partnerships, and just about everything else. It seems like on a daily I’m reading about another teen who has taken his own life, or how some legislature has been shot down prohibiting people who love each other form sharing a legal union, or that someone is fired, ostracized or killed. Maybe I missed something.The reality is by taking such a stance, the women on the line and the others in the chat room are not doing anything that contributes towards a more just environment nor helping to increase the health of future generations. It is not raising awareness, it is not getting more Black women to breastfeed and it is not helping to end disparities — especially the ones that affect those of us in the room the most. But the only thing I can hope for is that even in the midst of it all, there has to have been some kind of progress made — in breastfeeding and perspectives. And I do agree one one thing she said — that “Not being able to feed your baby in public is a form of oppression.”And this, my readers, is my 100th blog post.

After a great deal of reluctance, I have embedded the episode from that day. What is so unfortunate is the conversation went so well, until the show ended and we began to stream and another listener called in. On the link below, I call in at around the 63 minute mark and the other listener at 114 minutes, but shortly after that my cell phone signal dropped. Keep in mind this is not the entire episode, since once the show ends on Blog Talk Radio we move to the ‘After Party,’ a different forum where we are able to continue chatting through the online chat service as well as through webcam. It was insanity.Disclaimer: Queen Ifama always uses very strong language during each show. If you are sensitive to profanity, you may consider skipping over listening in.