Yep. She said it! But you knew this was coming, right?! This came from the same woman who told me she could care less about MLK Day because it does not impact her. Well, her ‘words of wisdom’ this time was that the university I’m entering this Fall needed to fill a quota, which is why I was accepted.Initially, my plan was to put together an extremely long and drawn out angry Black Feminist post about what she said, and criticize this racist ideology. But then I figured why even bother. This isn’t anything new; we’ve all heard it before, and this won’t be the last. So to be honest, I don’t really know why I’m writing about it now. In my experience, whites have usually conveyed this belief through some stupid display of a laughter, after the fact -“Hey, *insert employment place, educational institution, etc* needed to fill a quota. That’s why you’re there. Ha Ha!” But that didn’t happen this time. And I think that’s what sets this scene apart from others. Said white woman genuinely believed she was being encouraging; that I should be thankful for her ‘insight’ because she honestly believed was cheering me on.

If you look at my educational background before returning to school as an adult, I wasn’t exactly the most likely person one would project to enter into a doctoral program — especially this one that is extremely difficult to get into. I didn’t have an ideal academic background, by far, and perhaps it was the lengthy amount of time I quit high school that gave way to this assumption. That that, along with my ‘incapable’ Black self, if the university needed to do some charity work, then hey, pick me, right?! And maybe what she said may hold some weight. But this all happened before I took myself back to school and showed up to class, and sat on the front seat so I wouldn’t be distracted. That statement may also have been valid before I took time to get extra assistance if I needed it, and even took classes in areas I made sure I was completely unfamiliar with, to expand my horizons, and challenge myself. This was before I stayed in my professor’s office, asking questions about things I was unsure of and before I made the local Dean’s List, the international Dean’s List, and then the International Honor Society. This was before graduating with honors, and speaking at conferences, blogging, getting some of my work published, receiving glowing recommendations from my professors who know my work first-hand, leading discussion groups — and before the zillion of other things universities look for when reviewing applications, including my desire to expand my knowledge as a scholar, have already constructed my own hypothesis around my research focus, want to contribute more information to the field, and have been working with communities for positive social change, before going through this program to continue my work, and becoming a university educator myself, then maybe she may have a point.

Look, I know I didn’t get anywhere by myself. I don’t have a steadfast belief in meritocracy — that I (or anyone else) accomplished everything alone. There have been plenty of folks in my corner, cheering me on and extending their hand when I need it, because they believed in me and my endeavor. But this is not about that. And I feel a bit selfish and maybe self-centered focusing on my personal incident with this white woman, as something that was directed at me alone. The issue is by far larger than someone believing the school is dishing out charity work. This is the attitude that remains pervasive in this society, where whites continue to believe they are far superior, and are entitled to the ‘cream of the crop,’ and part of their white privilege means ‘helping’ us out a little.

Said white woman left out that wee little part about us living in a society that values white people. And that because of this continued legacy white people dominate institutions, workplaces, universities, and most other areas. That also stemming form this, the belief that People Of Color aren’t really worthy of anything – because that legacy has made white people believe they are far more qualified than anyone else and us ‘minorities’ (I hate that word, btw), don’t have the mental capacity to comprehend much, (Sadly, even some POC have subscribed to this). We’re looked on as zombie-like creatures, unable to think for ourselves so we need those ‘leftover’ opportunities ‘handed’ to us. In this racist society, where a Black person learning to read was once punishable by death, and so many communities of color have been subjected to even losing generations of traditional wisdom, this attitude continues to shape the minds of white people’s belief in their supposed inherent superiority.

Getting anywhere or anything for no other reason than white skin, is a ratio of 99 to 1, no doubt. I didn’t even get in sexism. Or any other ism and phobia, for that matter, that shapes countless experiences and continues to underscore discrimination. Pft.

For who? To keep white people shuffled through the door, in order to maintain the status quo?

Some of us actually have to work!

I’ll be laughing all the way through my dissertation. 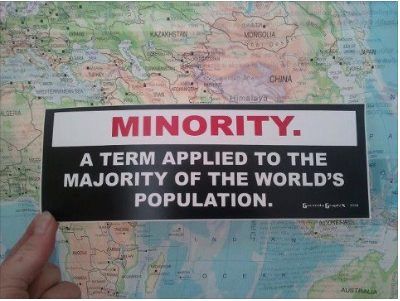 2 thoughts on “I’m getting my PhD because I’m a ‘minority’ and the university needs to fill a quota!”