At the end of May I traveled up north to Xwlil’xhwm, to help a friend with her baby. Xwlil’xhwm is the pre-colonial name for Bowen Island, British Columbia, a city just outside of Vancouver, in Canada. Even though the reasons I was there weren’t the greatest (my friend has ruptured discs in her back and literally could not lift her daughter for diaper changes, baths, or for anything else), I really enjoyed being there and being able to help out.Being at the home of a radical Black Feminist queer human rights lawyer, for two weeks, as you could probably guess, had its amazing moments — I’m sure you can imagine some of the discussions we had. Aside from being in the company of someone with congenial worldviews, and having those conversations Black women have in each other’s presence that affirm our very existence, something I was so impressed with in is her outlook on Black breastfeeding — her progression, where she went from being adamantly against the tradition to where she now ‘cannot imagine not being able to have breastfed’ her now one-year-old daughter. It really made me think about the way we discuss the tradition and also the power of ‘keeping it real’.Let me explain what I mean.*I asked my friend for permission to share some of her story on this blog*

Even though she lives in an environment where breastfeeding is promoted much more than here in the U.S. (even though she says this is just a surface level idea, since actual support is greatly lacking), when I first mentioned breastfeeding to her when she was just entering her second trimester — about the importance of breastfeeding for Black woman, she, like so many others in our culture, was not buying it. The messages about our bodies being reserves for others, along with other areas of concern about gender identity, was at the forefront of her thoughts. After that seed was planted, and with some encouragement to examine her biases and trust herself, she began looking into the tradition more.

She will be the first to tell you that she did not want to breastfeed. That initially she did so begrudgingly, even after she began learning of the benefits. That she wanted her daughter to have the best health possible, was still met with reluctance. Some people may view this as ‘selfish’ but I view this as a very powerful and something that can allow us to draw more people in and examine the deeper issues of breastfeeding for Black women and Black people, who feel this way but never truly discuss it. I think it humanizes our experiences. And it humanizes breastfeeding, and can help start new conversations on what it means to our community.

I can’t help but think about breastfeeding and the way it is always romanticized — how most only discuss how much they are in love with it. I’m not saying that many women who breastfeed do not have feelings of overwhelming joy when it comes to being close to their child in this way — I’ve heard many of those. But I don’t think I’ve ever heard of another woman who said they just did not want to breastfeed because of the reasons stated above, and only did so because of the benefits. Usually I find that aside from a few stories about how to decrease pain or hearing about other issues with practical matters — engorgement, for example, often times these conversations about deeper issues and how this truly affects our desire or even ability to breastfeed, are lacking.

Am I making myself clear?

Another friend of mine talks about issues within the Black community — about how our ‘secrets’ have been and are continuing to kill us. She says in order to continue to live, we must talk about things that are not easy to talk about, and that telling her story keeps her alive. I know some pretty awesome people. And I’m sure you can see where this is going in the context of breastfeeding.

Today my friend is even impressed at how far she has come. She says she cannot imagine not having breastfed, and recognizes that even though it took a long time to get to the point where she is now (and she has exclusively breastfed her daughter since birth), instead of viewing her milk as only nourishment, she recognizes breastfeeding for Black women as a site of empowerment, where issues that have been steeped deep in racism, gender normative identity, white-centric views and separation of Black women and our children, can be deconstructed. Nursing is her baby’s ‘home’. There was so much other good stuff we talked about in this area and I will definitely get into that eventually.

I think visiting was more than just about washing dishes and laundry, running errands and carrying a precious baby girl around. Aside from my love of Black women, and actually putting into practice that when I better care for other Black women I am better caring for myself, I truly believe being there opened an avenue towards a new set of ideas on ways to challenge issues that run deep in our community that have been situated for generations and viewed through this lens. I don’t agree with mainstream perspectives on how breasts, bodies and even gender identity and others are exploited, and are big issues situated between an infant and its mother (and many others), but while we work towards dismantling those notions, how do you think the idea of ‘keeping it real’ — hearing more stories of ‘breastfeeding begrudingly’ would work towards our cause?

I thought I’d give you a quick progress report on my journey towards doula certification. The great news is I talked to Shafia Monroe the founder of ICTC, and she told me that my Certified Lactation Educator certificate will count as ‘auditing a breastfeeding class’, so that’s such a plus. Also, I’m just an inch from being signed-up for child CPR and will be taking this course soon. Next, I plan to audit a childbirth class, read and write a review/report on the last two books on the list — and oh ya, help some women give birth. I reckon that would help. 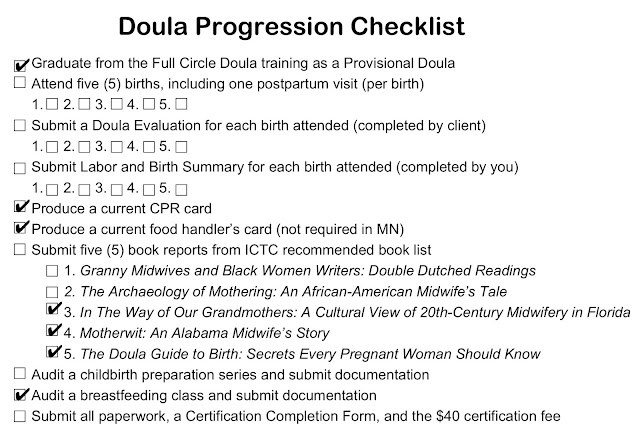