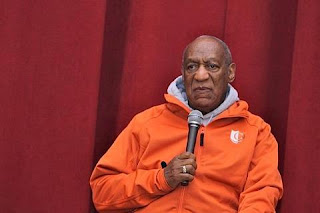 Ahhhh. I had no intention at all of writing this post. I signed out of Blogger, after posting my article for this week, on what I’m reading and was going to call it a day, after I excitedly shared with my facebook peeps that I had, for the first time used the word ‘vaginally’ on my site, that has been almost exclusive to breasts. But since someone shared a link with me, now I’m going to talk about Bill Cosby around here?! To what do I owe thee? It’s all connected anyway.

A couple of people have asked me if I have seen this image of Bill Cosby — the one I inserted in this post, up top. Underneath the original image floating around the web, it has an almost novel-like inscription directed to not just Black youth, but to the whole community. Have you see it? For some reason I got the impression that it was from the early 2000s, but now I’m thinking it was from recent(?) If you follow me on Twitter, then maybe you caught the brief conversation between myself and my tweeps about it the other night. And I knew that if I offered my quick response ‘Yes, I’ve seen it, and don’t agree’ then it would be followed by another and morph into a potentially long debate, I figured I’d share my thoughts here. Yes, I have see it! In fact, not only have I seen this, but I would argue that Bill Cosby is largely incorrect, by offering such a narrow perspectives of the issues, and I find so many things wrong with what he says.

I want to start a conversation about this. Yes, I believe that instead of always talking about floods — the problem, we need to practice the ‘Noah Principle’ and build arks — offer solutions. But what may be best for my social circumstance, for example, may not be best for the next one, so at the end of this post, I’d like you to weigh in with your thoughts.

To be clear, I have NO problem criticizing my community. I admit that once upon a time I may have been reluctant to do so because I thought that if I did so then it would mean that I was not working to clear up these issues instead of bringing them to the forefront. Not anymore. In fact, if you’ve been reading along then you would know that this is a new area I focus on in breastfeeding research — what role do we as Black people play in our own disparities? I have no issues with calling things out. What he is doing, however, is quite a bit different, and is basing his information on the perceived (and largely accepted) normalized representation that reflects white ideas and ideals — at least in some areas, if not most.

First, Bill Cosby, Heathcliff, or whatever he calls himself these days — Dr. William Henry ‘Bill’ Cosby, Jr., Ed. D, as it was inscribed at the bottom of the post — his full name with credentials means it looks more official, I guess, criticizes Black people’s use of language, by saying that we don’t speak properly. Well, there are some Black people who are praised for how articulate we are and how proper we speak (insert *ugh*), so I reckon he was just talking to some Black folks:

“They’re standing on the corner and they can’t speak English. I can’t even talk the way these people talk: Why you ain’t, Where you is, What he drive, Where he stay, Where he work, Who you be… And I blamed the kid until I heard the mother talk. And then I heard the father talk. Everybody knows it’s important to speak English except these knuckleheads. You can’t be a doctor with that kind of crap coming out of your mouth. In fact you will never get any kind of job making a decent living.”

Getting straight to the point, there is NO such thing as the ‘proper’ language. All languages are grammatically correct. Bill Cosby (and countless others) have ideas that are based on centuries of English domination and imperialism, which has been used to subjugate others. In reality, *as long as one person understands the point another is trying to covey, that is ALL that matters.* Whether that is Ebonics, Jive, or any other broken and mixed-up usage, what counts is that I get what you are saying. The idea of ‘proper’ usage is based on nothing more than a system of power, where many people continue to say that this grasp of the English language means we are forced to try and ‘live up’ to white standards. But I say, if your natural tongue is being denigrated, while cultural genocide and ethnic cleansing happens as the inevitable result by whiteness and English, which has worked ardently for centuries to become the apotheosis of the world around us, then this is not ‘living up’ to white standards, since this is not ascension. In fact, it’s ‘living down’.

“People marched and were hit in the face with rocks to get an Education, and now we’ve got these knuckleheads walking around.”Next, Jr., shed some light on our decline since the days of the the Civil Rights Movement:

You mean like the people marching around and being arrested as we speak protesting the closure of over 60 schools in Chicago? SIXTY!!!!! Mostly elementary schools in Black and Brown neighborhoods? I’ve inserted a few images, just in case you need a visual. 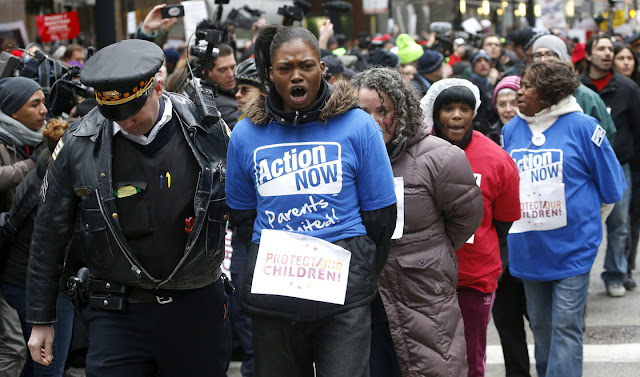 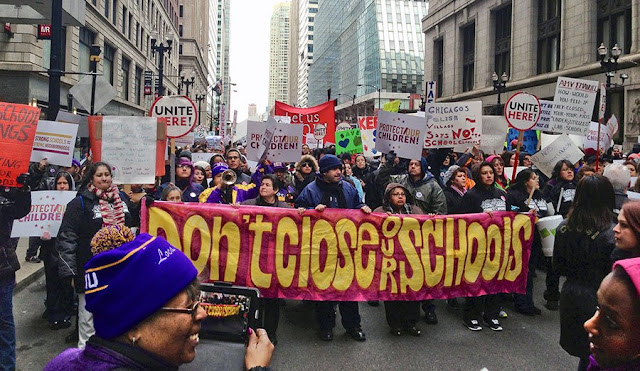 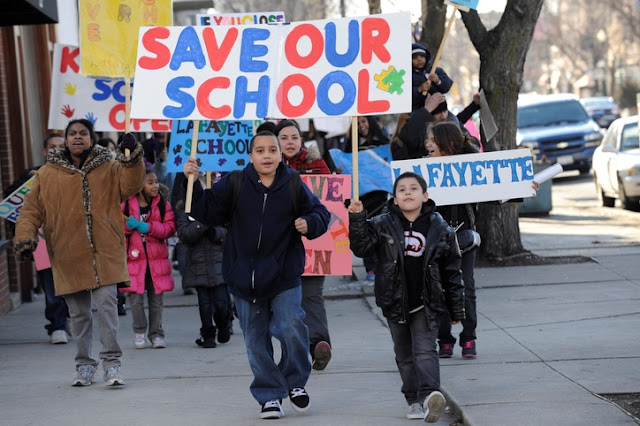 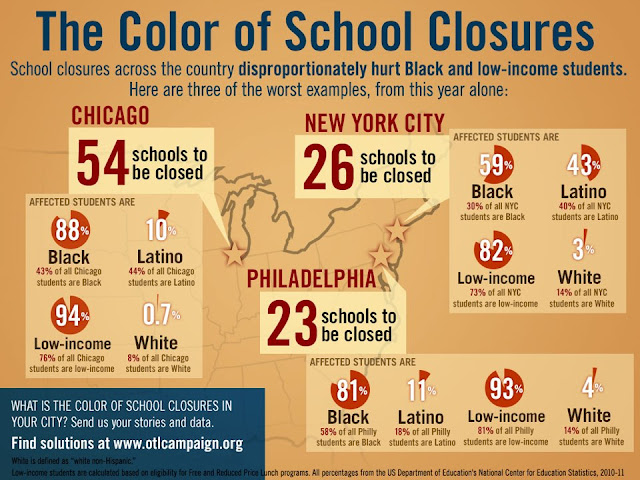 Keep in mind, Cliff, that this is only a very small glimpse of the overall climate of the racial injustice and culturally insular society, built on a legacy of exclusion directed at our communities. Black literacy was once punishable by death, remember? And even while marching, after Brown v. Board of Education, which he referenced, a suit that argued against the so-called ‘separate but equal’ law when in actuality Black kids were in sub-optimal classrooms, without running water, libraries, space to move around and learn in creative environments. Remember the money pumped into white households via the racist wallets of the U.S Government (which actually because of taxes everyone paid for), to send white kids to what we now call private schools, to avert interaction with Black ones? Do the images above remind you of something? Should I get into irony of current outdated textbooks, if any at all, thrown down as the crumbs from white people’s educational plate, and infused with bullshit ideas on centuries of so-called white sovereignty, being made to abide by a one-talk, one-think system inspired by white standards, that ridicules anyone with a difference — of opinion — or of anything. And where being more active and energetic than the student next to you lands you a seat with the psychologist, whose textbook knowledge paints everyone with the same white-centric psychological brush, that is far from many actualized truths.

I won’t really get into the $500 sneakers, really, because frankly we’ve all been duped in that area. I’m not saying that everyone has done so or that I’ve ever bought a pair of $500 dollar tennis shoes — or a $500.00 pair of anything for that matter. No way! My most expensive pair of shoes I have are actually not shoes — my dark chocolate/espresso brown Birkenstock Livorno boots that I got for half price = $125.00, about seven years ago. I admit I do love them. But I’m not worried, because I know Dr. Huxtable isn’t really talking about shoes. I mean, I’m sure this is just an example he’s referring to because of a much larger issue, and he’s right. The issue — you know the ubiquitous commercials, and billboards that surround us? The pamphlets we receive in the mail and articles promoting consumer goods, that now play before youtube videos? They’re also embedded on websites each time you click on a link, and also in the newspaper, — many people allow them on their personal sites in order to generate revenue from the sales. These corporations even start the kids off early by ensuring they’re riddled with a dose of endorsements, with a lineup played during their Saturday morning cartoons — and all of the other ways we have marketing brutally forced on us without our consent — just like the ones that came on during your show. Shows. The same ones plastered everywhere that constantly tell us we’re useless without their ‘stuff’ — yes, even the numerous jello pudding pops you once peddled (I’ve inserted one of your many commercials for the brand below — for sentiment. They remind me of my childhood).

Well, consequently, these same messages are ones that disproportionately affect the communities that you pinpoint — the ones who, according to you, have no money for ‘real’ things, and are ‘uneducated’ or undereducated, have low literacy rates. And as it turns out, William, personal property and consumption offer a greater sense of security — a way to fit in with others around. And though it’s definitely a false-sense of security, a feeling of higher self esteem, which then falsely morphs into a sense of a higher social esteem (yes, I have personally researched this). But this is not exclusive to these communities, but they just face the brunt of the stigma. I  mean I bet you and the people in your own social circle fall victim to aggressive marketing or a desire to fit in. What kind of cars do you drive?Maybe at some point I’ll get into my thoughts on the idea of the so-called normative nuclear family, another area he criticized, along with his other opinions on our names, and sentiments towards Africa, and I may even continue the conversation on all aspects because there is just so much more to say. For now, though, I think my point is clear. I’m not placing Blacks in a position of people without agency. That is farthest from what I think or believe. And I’m not suggesting we can’t do something, because I know there are plenty of areas that need improvement, and agree it is absolutely frustrating as humanly possible. But there is a much larger picture, and a one-sided argument excluding the details of how some are gaining while others remain on the sidelines is getting us nowhere.

Bill Cosby is praised for his philanthropy, and hailed for his multimillion dollar donations — especially that one —  when he cut a 20-million dollar check to Spelman University some time back. Was it the 90s? That is some gesture. And I can see his desire to help improve certain social circumstances. But Bill Cosby profits off of and supports the system run by corporate moguls that only reinforces this dynamic of power and inequality, worldwide! I would be much more inclined to believe in this type of work if it actually did something, perhaps, like criticize a system that allows ONE man to make that much money by doing nothing more than reading some scripts from a piece of paper into a T.V. screen — nothing that betters the human condition, if it even contributes to anything at all. Some people get 20 million dollar checks, others starve — are out on the streets — aren’t in school — don’t have jobs….

CRITICIZE THE FOUNDATION THAT SUPPORTS THIS DYNAMIC.

Get to the root!

If you support what he’s saying, then that is your right. But I don’t think I’m too fundamental in my thinking to say that this is a much larger problem, one we all must take part in to create a more just society and a more equitable world. Conversations like these, geared at maligning more vulnerable populations are just another way for each of us to try and weasel our way out of recognizing that We are ALL to blame, and are ALL responsible. And we must keep this in mind if we are going to create change. We all play a part. Myself. Others. And yes, William Henry Cosby. Even you.