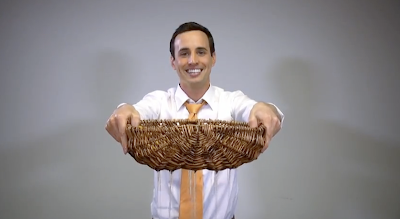 The mega online education platform, Coursea that offers free education classes, played a joke on those of us who ‘Like’ their facebook page. On April 1st, they sent a course description informing us of a new five-week-long course in Underwater Basketweaving, taught by a “Maritime Anthropologist” and was starting that day. My fingers could not press ‘I’m in!’ fast enough (it literally takes one click to enroll), but almost as quickly — minutes after this course was introduced, we received an email that explained that the professor “Due to an unplanned research trip to a recently unearthed Aquacamamatian burial site, has decided to postpone his class.” For me, (and probably many others) it was only after the dialogue on facebook, and recognizing that this was a prank, is when I did more investigation, including returning to the page, re-reading the description and then watching the accompanying video, which I had not done initially.

I have purposely embedded this video twice — because I don’t want you to have to scroll up. The first time, I am suggesting to pay attention to what “Professor. Dunne” has to say about his work among the ‘peoples of the Aquacamamata Peninsula,’ before focusing on other areas.To be honest with you at first I was amused; it is very obvious this professor doesn’t have a clue what he’s doing. Pulling the large basket from the water — one that I have seen used for fruit, was pretty funny. But that’s in the very beginning. As the video progressed, it is clear to me why this video became a hot topic in a course that quite a number of us students just ended on Aboriginal Worldviews and Education, and why the faculty members of the course sent out an email discussing the significance of this ‘April Fool’s joke.’With anything, there is always quite varied opinions and interpretations. I have my own thoughts about it and I’ll briefly weigh in later. But for now, take a closer look at the images below. I took screenshots just in case Coursera decides to delete the video. 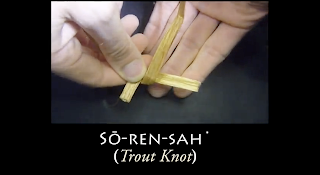 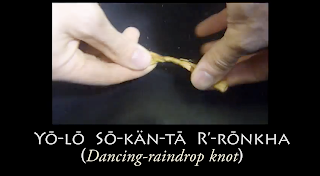 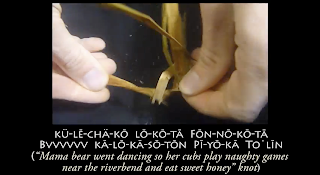 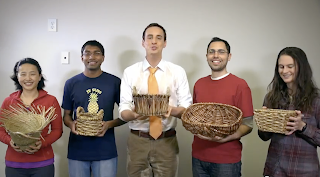 While I was watching the short video, what also caught my eye was that “Professor Dunne’s” shirt was wet after giving his first ‘demonstration’ but that’s what made me notice something else. His nipples are pixelated!

I had to rewind this because I was kind of shocked. I haven’t seen this type of _____ modesty(?) towards male bodies and their chest areas before (none that I can recall, anyway), and so I had to share it. I wondered if this was part of the joke or was it intentional, just to keep them from protruding through his shirt? Below is the same video. But this time get your glasses out if you need to, and pay attention to his chest area between 1:25 – 1:33.

Did you catch that? 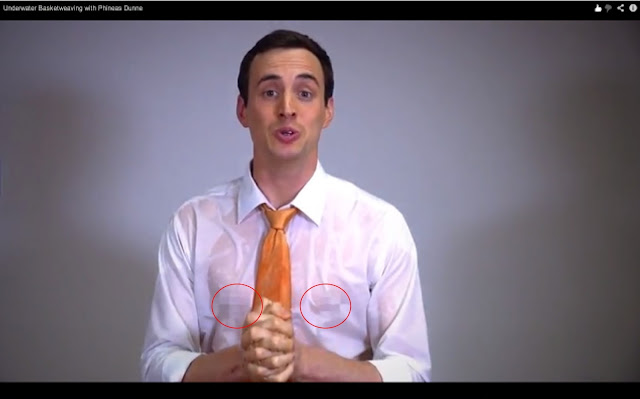 To be clear, if there were indeed an actual class on underwater basketweaving, taught by an anthropologist, or anyone else, I would be the first to sign up. I have only heard of this subject as a mock area of study in colleges before — one that was suggested to people as something laughable in the face of “real” subjects. I also believe this course and video were not intended as anything other than a joke by the part of Coursera staff. Finally, and most importantly from my perspective, I also believe some may say one would need a great understanding of the history of basket weaving, in order to understand this offense. I’ll admit I don’t know much about the sacred tradition of underwater basket weaving, but I do have a good grasp of colonialism, white supremacy and the history of anthropology, and think that’s sufficient enough to criticize this course material.

Instead of being able to shake this off as a harmless joke, I am personally offended and quite infuriated. This mock anthropology professor portrays the ‘normalized’ representation of a white man who has traveled abroad to study the ‘Other’. Not only does anthropology have a history of participating in colonialism and using the ‘findings’ from a Westernized gaze to put communities on display, but I’ve also explained briefly before about racial and gendered exclusivity, which I’m sure is not too difficult to imagine how this would work against basket-makers, who I can only imagine consist of a largely female population. Also, here in the United States, people of color were drawn to the discipline because they believed that by proving that there was no biological basis for race, it could help erase the racial injustice in this society that was responsible for countless atrocities largely against Black and Brown communities. Stemming from the work of these pioneers of anthropology, there have been many who have made efforts to decolonize and transform this discipline, and work hard against this legacy, making it one where anthropology is used to make a positive difference — and not to one to make people different (the ‘Other’). There are some New Faces of Anthropology and anthropologists, myself included, committed to using the tools of this discipline for the good — to learn from each other in order to bridge social, and cultural gaps in our understanding and positively impact, for a more just and equitable world.

Is there a difference with this video and the portrayal of Blackface, where whites would apply black paint/shoe polish/whatever else, on their faces to mimic and impersonate Black culture? In this country, Blackface is something that grew during the depths of overt racial injustice, and it continues to have a tremendous impact today. Is his use of a mock-language while describing the procedures and steps for basket-making among these “Aquacamamatians” any different than the ways English imperialism has castigated non-speakers — and has opened the floodgates for creating, or at least using mock languages (and we can’t overlook the fake accent)? Why didn’t he use his native language? How is this different from prevalent stereotypes that portray Natives and Aboriginal people as teepee dwellers who sit around and smoke peace pipes and braid their hair? Is this different than Redface? Is this different from any other racist and largely inaccurate representation of a people or community, even though this is a made-up group?

Although there’s plenty more to be said about this phony course, professor and video, including the fact that these issues “can lead to discrimination and the support of racist laws and policies,” I’m not going to go too much more into this. I want to see feedback from you, readers, on what you think. What are your thoughts on ‘Professor Dunne’, his Underwater Basket Weaving course, use of a mock-language (especially the Hispanic accent) and his portrayal of anthropology? What about his nipples (or lack of)? Of course I’m interested in this coming from a site dedicated to breastfeeding and its interlocking politics. Is it at least interesting to you that in a society like one here in the US, so obsessed with controlling women’s bodies, that his are deemed inappropriate, if that’s indeed why they are pixelated? Can we just call this humor? Or, if you feel there is no concern with any of this, I want to hear that, too. Share your thoughts. I’m looking forward to the dialogue.

3 thoughts on “Mock Anthropology, Mock(ing) Culture and PDN (Public Display of Nipples) Apparently Aren’t OK on the Menfolk Either (Video)”