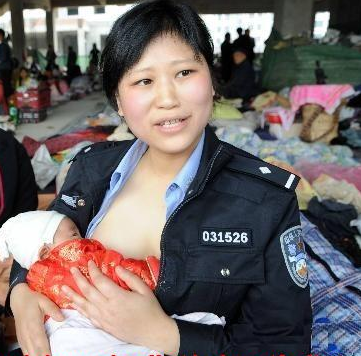 There are many types of heroes out there. Often times, I see people commend military personnel for their work — the ones who invade foreign countries, waging war on other armed forces service members and civilian people, and whose actions cause years of economic, social, mental, environmental and physical turmoil — and countless deaths, all while fighting for our ‘freedom’. But I don’t!

I came across this video and it almost made me cry. It’s from 2008 and highlights the story of Jiang Xiaojuan who has been called a ‘Breastfeeding Hero” when she was called to emergency duty after an earthquake in Jianyou, China. While there, she found several hungry babies and since she was currently nursing her six month old, decided to help these other hungry babies out — by breastfeeding all of them. Nine at one point. And once a few babies were reunited with their mothers, she continued to nurse others, even when this video was made. 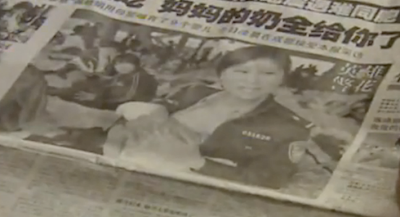 I’m not excited about the circumstances that made Jiang Xiaojuan have to feed these babies — the natural disaster that devastated the land and life of many of these residents, but I absolutely admire her initiative and bravery. I’m happy this story made the front page.