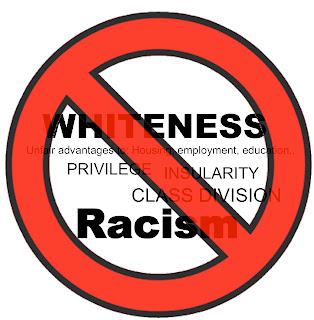 For the past few days, I’ve been walking around feeling pretty upset. I went to a friend’s birthday party on Saturday night, and even though I already felt slightly weirded out about being around all but two people I didn’t know, this was confirmed after being in a room of white people, who foolishly believe it’s OK for their racism to come off as ‘friendly’, and ‘joking’ gestures and experiencing some other microaggressions about sending someone to the back of the bus. That was the end of my night. I left. But not before one of them questioned “It wasn’t because of what I said, was it?” That set off my bad weekend.

The next day, or, later that day — on Sunday afternoon, I spoke to someone I’ve known for years but haven’t seen or talked to in a while. She and I don’t agree on all that much anymore these days — especially when it comes to racial issues. We don’t even agree to disagree. We just disagree. She decided to start the conversation off by telling me how her family continues to unfriend me on facebook for talking about racism and whiteness and how she doesn’t always want to hear about it all the time. I’m fine with that. It’s not the first time I’ve been de-friended for this same subject matter. And it won’t be the last. But I was more irked during this conversation than others, specifically because she continues to spout off her beliefs on ‘reverse racism‘ — racism towards whites from communities of color — since this is very possible, of course, given 500 years of white rule. She told me that she experiences this as a white woman in this country, and according to this viewpoint, since I am among the group that challenges this continued domance and support others who do then I, too, am practicing this.

I can’t explain how much it irks me that this white woman believes race doesn’t matter — or that it’s only worthy of debate in the context of these so-called ‘crimes against whites.’ And because she belongs to a dominant group, the ‘reversal’ happens when Blacks and people of color counter the oppressive tactics, while the dominating group tries to assume a victimized space by crying ‘anti-white’ in this country, continues to blow my mind. That whites remain oblivious to centuries of oppression directed at communities of color, and the historical legacy and strategic ways that have and continue to concentrate certain groups in this and other residential areas where she lives — a predominately Black neighborhood — one of the most racially segregated cities in this country, escapes her and baffles me. I’m irked that she and many others refuse to recognize that by coming into just a few white dollars, could move where she wanted within this system that is designed with her in mind and she’d never have to worry about being run out of town and accepted.

She also laid in on me about nursing — saying there is no such thing as racial issues and privilege in breastfeeding — since the only reason she breastfed was because of her financial status — because she was so poor, which of course is the reason she lives in her neighborhood, and told me I’m just “looking too much into things.” If that were true – that women breastfed in larger numbers because of their lower socio-economic statuses or, when they’re poor, I’d be thrilled. In fact, if this were the case, I’d be much happier because our babies would be thriving. We’d hear about less cases of health disparities especially among children of color where these are rampant, including less incidents of childhood illnesses like ear infections, SIDS, less cases of babies experiencing gastrointestinal problems such as diarrhea, constipation and other issues with their gut that are largely preventable with breastfeeding. We’d worry a bit less about environmental pollutants dumped into the backyards of the most vulnerable members of our society (check with your local Native reservation especially, btw), since there would be less waste from formula companies, and we wouldn’t have to worry as much about this showing up in the breastmilk of these communities. There would be less cases of asthma and allergies that are directly related to these pollutants. We’d also be able to worry just a little bit less about our Black mothers and many women of color, who, because of the racial framework of this society continue to receive inadequate medical treatment because of lack of resources and access to healthcare and a rightful mistrust of healthcare professionals — the legacy, and these women are dying in disproportionate numbers. Breastfeeding would help preserve their health, too. What’s more, I may have never started this blog, or any type of breastfeeding journey. Would I need to? Or, instead of writing about inequality, racism and injustice, I’d focus more on things that give me warm fuzzies like rainbows, dragonflies, faeries and sparkle dust – and myself and thousands of other advocates, activists and healthcare professionals, who work on improving the status of communities of color, could all get a day off. And the government would not be the largest supplier of infant formula for low-income families, spending over 800 million per year. The privilege of breastfeeding is dependent on more than what is or is not inside of your wallet. Whiteness fuels this inequity.

So she is wrong — about reverse racism, and the reason she breastfed. She did not do so because she’s poor. She did so because she is a white woman who lives in a society that values white people, white values, white culture and white customs. And because her white body, regardless of how often she’s complained of her imperfections, is tacitly and explicitly signified as ideal, and all others are made to fall in line behind this figure — even when it deals with a baby at her breast. And because there has never been one single instance where she questioned the legacy heaped onto her community members, who were at one point in history bought and sold as cattle, and how this may impact her today, in mental and physical health, social circumstances and a list of others that are at the center of lowered breastfeeding initiation and duration rates. Disparities don’t just fall from the sky.

So, if I encounter people who want to label me with a nonsensical term, ‘reverse racist’ for no other reason than my criticizing the dominant structure of whiteness and challenging the continued egregious treatment directed at non-white populations, by contesting the way it maligns, demonizes these communities and interferes with our babies, their access to breastmilk and our overall health and well-being, then I guess it’s inevitable. And I can live with that.

Other Sources:
Breastfeeding Report Card, 2012
Center for Disease Control: Morbidity and Mortality Weekly Report (MMWR)
How To be a Reverse Racist: An Actual Step by Step List for Oppressing White People

3 thoughts on “RACE MATTERS! Why I AM A ‘Reverse Racist’. And Why I Won’t Stop Criticizing Whiteness — In Breastfeeding AND Beyond”