I thought I’d bring you the second Bingo card — I’ve got at least one more up my sleeve after this. I hope you didn’t think I would just leave you with the dreary issues that was the first Radical Black Breastfeeding Bingo post I created.

If you haven’t noticed by now that I don’t really look at breastfeeding as solely an act between a mother and child, but believe everyone is involved in every aspect, and hopefully this provides a clearer picture of that outlook. I’m going to run into the ground that I believe breastfeeding extends far beyond mainstream ideas of infant nourishment and bonding — even though those are, of course, important. It goes much further past the mechanical steps of attaching an infant to its mother’s breast. And just the same as the first one, this card can only hold so much. Some of what is included here isn’t really anything new, but to see the culmination and the community involvement under this umbrella, is almost never part of most conversations. When we all help out, the ways Black people can benefit from breastfeeding — the empowerment runs deep. For example, you’ve heard talk about psychological bonding being discussed by Queen Ifama, challenging a legacy with roots in Black enslavement. That idea flows over into the inevitable increase of Black unity, which benefits the entire community, and gives us a higher self and social esteem — and saves our lives. It also allows us to challenge capitalism, and saves us money while simultaneously helping to preserve the environment (of course Communities of Color feel the most detrimental effects of pollutants).Do you see where I’m going?

Do you have BINGO yet?

But that’s not all. And even with all of this being said I am still somewhat reluctant to post this card, without writing explicitly on the ‘what’, ‘why’, ‘how’ ‘so what’ and ‘now what’ of it all. I want to explain my perspective and where I come up with this — which I plan on doing in great detail in a future post. But for now I want to at least begin a conversation and see what you think. I’m fishing for dialogue, and want to also hear your ideas. Let’s talk about it! 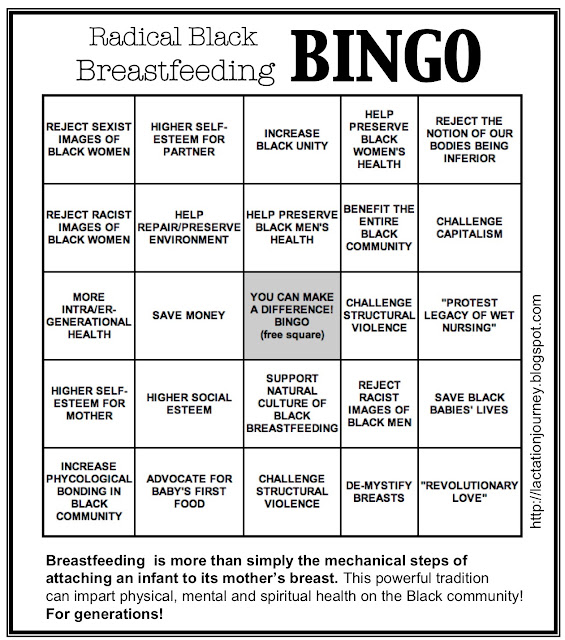