My friend sent this one to me — the article below, but I’ve heard it’s been all over the news and other places, too. A professor, who just so happens to be a mother, brought her sick baby to class and the baby, as babies tend to do, got fussy, so this mother and anthropology professor thought of a solution. Besides the fact no one uttered a word before the nursing, I can’t think of a more ideal setting other than an anthropology course on feminism, and I’ve been trying to imagine the curriculum: cross-cultural comparisons on social stratification, male dominance and exploitation of women’s bodies — especially their breasts, against the biological norm and especially here in America, and various ways to counter this learned behavior. Now I’m not signed up for the course and never sat in on a class, but I’m willing to bet I’m not so far off.

An American University Professor Breast-Fed During Class. So What?

It’s easy to forget the almighty power of the ordinary breast. If you have a couple yourself, most of your attention spent on them in a lifetime is focused on making sure they look right in clothes and aren’t in your way, with occasional forays into sex and feeding infants. But breasts actually have a secret super power. When whipped out under the right circumstances, the ordinary mammary gland has the ability to expose a tremendous amount of cultural hypocrisy around gender and parenting.

Adrienne Pine, an assistant professor of anthropology at American University, unwittingly learned that lesson when she decided to shut up her fussy baby in the culturally prescribed way, especially for the highly educated middle class set:giving the baby her boob. Had she done so safely ensconced in her home, perhaps beatifically meditating on how this means so much more than any career ever could, she would have been held up as a moral paragon for all women. But since she did so in the middle of doing her job, in this case lecturing a class full of students taking a feminist anthropology course, she’s instead become a national scandal, with the controversy detailed on the front page of today’s Washington Post.

The world knows about Pine’s transgressively feminine behavior in the traditionally masculine role of college professor because the student newspaper immediately pounced on the story, and Pine responded in a way that likely hurt her cause by coming across as pedantic and needlessly defensive. Still, her situation should draw sympathy from those who aren’t inclined to immediately think the worst of women. She’s a single mother, and her baby couldn’t go to day care that day because she had a fever. Pine had to choose between missing the first day of class or bringing her sick baby along.

It seems that if it hadn’t been for the breast-feeding, this entire situation would have gone unnoticed. But many students completely lost it when they saw an actual human breast. Such as Jake Carias, age 18 and interviewed by the Washington Post, who claims that he was fine with the presence of the baby, but not so much the boob:

But when Pine started to breast-feed mid-class, Carias said, it crossed a line.

“I found it unprofessional,” he said. “I was kind of appalled.”

Carias fired off a tweet: “midway through class breast feeding time.” He also posted a message on his Facebook page. He said he later dropped the class.

So, he spends his class time on Twitter and Facebook, but a woman who can continue a lecture while breast-feeding is an intolerable distraction? Personally, I remember college lectures as being most students’ least favorite part of school, a necessary evil that one struggled not to fall asleep during. Anything to liven it up would have been welcome. So, unless college students have completely changed in the years since I graduated, the whole thing has little to do with some sort of assault on their education and more to do with underlying anxieties about sex and gender.

Pine offers garbled and unconvincing arguments for why she breast-feeds, but she really shouldn’t have to offer an argument at all. Plus, regardless of how she frames it for herself, the reality is that for a woman of her class and age, choosing formula means having your peers act like you’re dishing rat poison into your daughter’s mouth. Funny how we live in a society that both expects women, especially highly educated and ambitious women, to breast feed, but forbids them to do so while pursuing their ambitions. If I didn’t know any better, I’d think pushing women out of positions of prestige and power and back into the home was a feature and not a bug of this system. 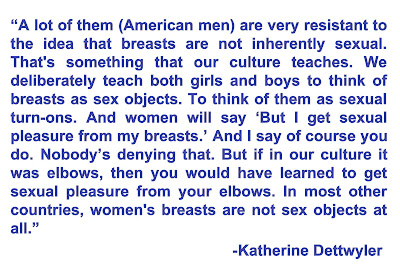