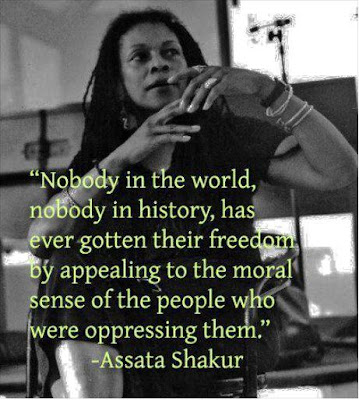 I reblogged the article below from the Frontlines of Revolutionary Struggle‘s website. If you are unsure about the current conversation surrounding Assata Shakur, who was, just the other day, the ‘first-ever woman to be added to the FBI’s most wanted terrorist list,’ I recommend doing a good amount of research on her story, and contributions she has made to the struggle for justice and liberation. Though being convicted by an all-white jury of the murder of a state police officer, like others, I believe Assata’s account of what happened on the New Jersey Turnpike in 1973, and am convinced of her innocence. I also agree that this sudden act to label her a terrorist, is itself an act of terror.

But I can’t put my entire faith into believing this is simply about one woman’s plight. The tactics of the United States, and political dissent vis-à-vis Cuba, as well an attempt to divert public attention from innumerable injustices on a local and global level, perpetuated by the imperialistic U.S. government, is at least also at the forefront, I believe. I also recognize this is only part of the legacy of repression and tyranny that has been sustained by the government, that we have seen experienced by those now and in the past — especially towards those who have sought radical and revolutionary change and social equality for Black, poor and oppressed people.Even though I admit I’m at a loss on offering ways to challenge someone being placed on a terrorist list, I’m doing what I can to spread the word and looking for whatever ways I can to become involved. I think this starts by hearing Assata in her own words.

My name is Assata Shakur, and I am a 20th century escaped slave. Because of government persecution, I was left with no other choice than to flee from the political repression, racism and violence that dominate the US government’s policy towards people of color. I am an ex-political prisoner, and I have been living in exile in Cuba since 1984.

I have been a political activist most of my life, and although the U.S. government has done everything in its power to criminalize me, I am not a criminal, nor have I ever been one. In the 1960s, I participated in various struggles: the black liberation movement, the student rights movement, and the movement to end the war in Vietnam. I joined the Black Panther Party. By 1969 the Black Panther Party had become the number one organization targeted by the FBI’s COINTELPRO program. Because the Black Panther Party demanded the total liberation of black people, J. Edgar Hoover called it “greatest threat to the internal security of the country” and vowed to destroy it and its leaders and activists.

In 1978, my case was one of many cases bought before the United Nations Organization in a petition filed by the National Conference of Black Lawyers, the National Alliance Against Racist and Political Repression, and the United Church of Christ Commission for Racial Justice, exposing the existence of political prisoners in the United States, their political persecution, and the cruel and inhuman treatment they receive in US prisons. According to the report: 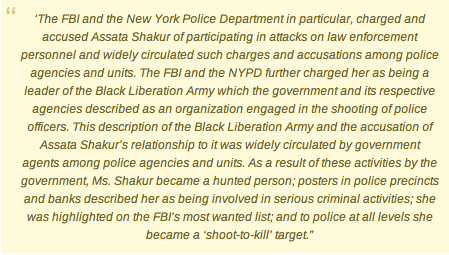 I was falsely accused in six different “criminal cases” and in all six of these cases I was eventually acquitted or the charges were dismissed. The fact that I was acquitted or that the charges were dismissed, did not mean that I received justice in the courts, that was certainly not the case. It only meant that the “evidence” presented against me was so flimsy and false that my innocence became evident. This political persecution was part and parcel of the government’s policy of eliminating political opponents by charging them with crimes and arresting them with no regard to the factual basis of such charges. . . . finish reading Assata’s open letter