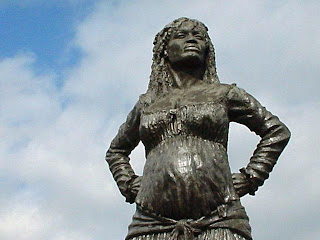 Scene 2: I was out with my little sister (in the store again) and we had our one-year-old great nephew in tow. While we were being checked out by this young sistah, she started talking to our little dude. I realized she was expecting and asked her how far along she was. Eight months. After we talked for a minute, and she told me her mother would be in town for this baby’s birth and she was happy because she wasn’t around for her first, I was relieved. I’m imagining in my head what I would have done had a conversation erupted between us and progressed to the point where I found myself trying to backpedal and get out of being someone’s doula. What on earth would I do with a pregnant woman?

That question is exactly what I’ve been thinking about lately. When I see Black women, I want to talk breastfeeding — and now about what a doula is. But I feel odd. It’s the same kind of feeling I get about talking to strangers about breastfeeding. Besides the fact that I’m a complete junkie for the theoretical aspects, and am interested in structures of power and dominance, I would have a much easier time discussing these types of political issues than practical matters — because the former looks at a much larger picture and doesn’t appear to zero in on one person’s circumstances. Part of me feels as if I’d be infringing on others’ privacy and questioning their efforts and being invasive about their situation; they know what’s best for their household. And didn’t ask for my input.

For me, being here means I am engaging in ways to work against the various social issues I challenge — that I am actively participating and working towards justice in a way that is new for me. It also means that I am setting an example that we are all responsible, regardless of our child status, for healthier outcomes and to confront those structures that create barriers. But I’m new to this area, and have no idea what I’m doing. But, I am looking for some type of instruction, or, what many others have told me — to find a mentor-type figure or anyone who can show me the ropes, co-doula, shadow someone or something of that sort. Because right now I know I have no idea what I’m doing, and I’m finding that I haven’t the slightest clue on where to even begin.

The image above is “A statue of the African Freedom Fighter in Guadeloupe, known to history and legend as Solitude. She was a great shero in the struggle of the Africans in Guadeloupe to end slavery more than 200 years ago. She was captured by the French when she was pregnant and executed the day after her baby was born. She was born about 1779 and hanged in 1802. Her name is Solitude. She is immortal!”