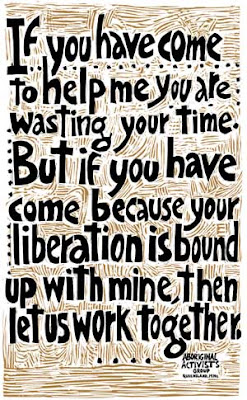 There’s someone out there who can help me articulate what I mean when I talk about anti-racist work being a trend, because I don’t have the word or words for it. And I’m almost positive that some scholar has already written about the topic that I’ve yet to see — but since I don’t have access to my personal library right now and I’m behind on my reading, I’ll have to explain what I mean. I’m perfectly willing to admit that my antenna is raised around the issue because of my perceived skepticism — or whatever that word is I just learned from watching a video by a local psychologist who does antiracist work here in Seattle. It means I’m suspicious.

Let me tell you what I’m getting at.

For me, most noticeable in learning the history of oppression directed towards communities of color, and especially in the direction Black people, is that the so-called ‘post-racial’ society we live in today is nothing more than a reflection of hundreds of years of domination that dons a veneer of equality, yet the foundation remains rooted in racist ideology. It just looks different. I recently revisited Black Sexual Politics — a text by Patricia Hill Collins because I wanted to see if she could help me understand and then explain what I had been thinking about. In it, she discusses one of the ways racism continues to maintain its forces, all while appearing to have disappeared. Dr. Collins discusses the global quest for dominance and the continued disadvantages of groups. My emphasis is on restructuring the racial hierarchy, as Dr. Collins explains in her chapter ‘The Past is Ever-Present: Recognizing The New Racism’:

It is important to note that the new racism of the early twenty-first century has not replaced prior forms of racial rule, but instead incorporated elements of past racial formations. As a result, ideas about race, gender, sexuality and Black people as well as the social practices that these ideas shape and reflect remain intricately part of the new racism. The new racism thus reflects a situation of permanence and change (Page 43-44).

One example Dr. Collins uses to describe the new racism is via the film industry. She says that even though our society has progressed and Black people are now ‘allowed’ in various so-called desegregated spaces like films, rarely are they prominent figures. This dynamic not only further marginalizes Black bodies, but it perfectly maintains the dominating forces of whiteness. I recently discussed something along these lines in a brief post regarding the maternal-infant Mammy, and my experience being at an institution that appeared to be inclusive and encompassing — de-segregated on the surface, but to me was simply a breeding ground for the production of white-centric birth and breastfeeding practices.

I’ve come across more and more white people these days who are talking about the recent revelation of their whiteness — that their entire lives they had no clue that strategic methods have been built and maintained with them in mind. Many, usually through taking courses at school, appear to have just learned that for no other reason than their skin color, they are afforded access and advantages in a society that values people who look like them. What I’ve noticed is that often times these manifestations come with a desire to put a hand in ‘fixing’ things by ‘helping out’. I will be the first to admire anyone who works at creating change in this world, and I also understand the importance of allies in anti-racist work — or in many other areas, but to me the larger picture just looks like something else.

The other night I was online looking for articles to share with the anti-racism breastfeeding committee I joined a few months ago. I was in search of articles on the topic not only because I wanted to see what was out there but I also wanted to know just who was writing, and exactly how they expressed their desire to end racism — and what new ideas I could find. Unfortunately, when it comes to breastfeeding and racism there isn’t much. I did, however, come across a few birth articles on the topic, and what stuck out to me the most were the ones on antiracism and anti-oppressive work in these practices. What caught my attention from the few individual and group organizations who appear to be working towards a ‘liberatory culture’ were on gathering funds to send women of color to midwifery school, or the coalition here in town staffed with white people who focus on supporting people of color and on informing other white people how they benefit from whiteness. They even go so far as to tell their members to shop at certain locations in order to help keep the doors of Black-owned businesses open. I have also begun to see these ideas in both personal and structural spaces that speak to other whites that their advantage can be used in order to give people of color a ‘hand up’. It sounds admirable, I guess. Except for I have yet to see any real substantiative critique of the underlying structure that strengthens the framework of these issues — how are these anti-racists working to end a system that values their whiteness?

I’m not accusing anyone’s sincerity. I’m not saying people don’t have good intentions, and I’m not calling anyone racist. What I am saying, however, is the issue is much larger than someone you or I know, and that even historically though many white abolitionists spoke ardently against the institution of slavery, had no interest in finding ways to garner true social equity for those enslaved, more than they did at working towards the greater attempt at preserving their own moral consciousness — or, as one of my former (white) professors put it “They just wanted to remove the stain from their soul.” And it appeared progressive. But this type of ‘help’ only worked at fortifying the ill practices and legal segregation which emerged in the subsequent years after abolition. It did nothing to change the foundation.

Because I want to examine more closely what lies below the surface and engage in more dialogue in order to find ways to challenge oppressive behavior that continuously mutates between generations, I’m calling on more critical thought from birth and breastfeeding advocates, anti-racist and anti-oppression activists. I’m concerned that the current structure of antiracist work serves as nothing more than a gateway for this cycle of dominance to continue. Without remaining aware and criticizing the structure that supports this ideology that values whiteness in society, anti-racist work is moot, and is indeed just another reflection of our current times, where just like Patricia Hill Collins’ example of mutated racism, the more things seem to change — the more they will only remain the same.

4 thoughts on “The white privilege epiphany, the trend of anti-racism and the reality of mutated oppression”