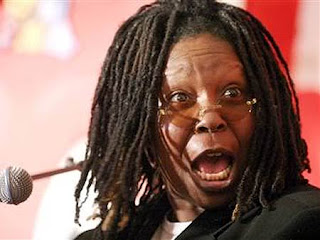 Because I met breastfeeding advocate and author, Kimberly Seals Allers last week at the ROSE Breastfeeding Summit, I thought this was a great opportunity to post an article she had written a few months back, titled Dear Whoopi Goldberg: Please Stick To Blackface Not Breastfeeding. And Stop Obstructing “The View” For Women With Mistruths. In case you’re unsure of the exact reasons behind Kimberly’s post, she ridiculed actress and television show co-host of The View, Whoopi Goldberg, who was responding to New York Mayor, Mike Bloomberg offering incentives to hospitals who encourage new moms to breastfeed (because there’s something wrong with encouraging new moms to breastfeed, of course). Goldberg told him to ‘Back off’ because ‘not everybody can!’

Now, if you know anything about me, you’ll know that when it comes to listening to celebrity advice/business I usually recommend pressing the mute button since I believe it’s often coming from an angle of people who just can’t identify with the overwhelming majority, and from those who are only icons of corporations strategically planted to advance a system that is responsible for countless inequalities, including breastfeeding disparities. I feel this way even when it seems as if the message is supporting the tradition. But this was good. So good, in fact, that I had been wanting to re-blog it for some time but couldn’t find the right opportunity.

Needless to say Whoopi won first place for foolery and ignorance in numerous categories, which you’ll understand if you know anything at all about Baby-Friendly Hospital Initiatives. But there’s not really all that much I can say in response, as Ms. Seals Allers did a mighty fine job on her own, you’ll agree, I’m sure. Watch the video, then read the post below in all of its unabridged glory — that I’ve already filed under ‘Best Of’.

It’s time to get your (sister) act together.

As an African American woman, my association with you is already tenuous given how I am still healing, or perhaps reeling, from the infamous incident of you dressing your then-boyfriend Ted Danson in black face for a roast and then later admitting to helping him write the racist script. This of course, is after you adopted a Jewish name to get ahead but yet pick up the African American mantle when it’s convenient.

But your recent rants on The View which can only be categorized as anti-breastfeeding and anti-truth don’t help any women at all, instead they only fuel the misplaced anger and hostility that unfortunately already cloud an important public health issue-an issue that could save millions of infant lives and bolster the health of millions of mothers.

Most importantly, you have a powerful and influential position yet you show negligent disrespect for that with your utter disregard for the facts before one of your riffs. Now, I strongly believe and agree that a mother should choose which first food is best for her and her baby. But supporting breastfeeding is not about removing choice, it’s about leveling the playing field which has, for decades, been tilted in favor of the big pharmaceutical companies that produce infant formula and then make back-door deals with hospitals and fund pediatricians, and undermine women in the process.

To make matters worse, it is very hard for women to actually “choose” when they are inundated with false information masquerading as facts. Particularly when those mistruths are being promulgated by movie stars masquerading as news agents. And as a seasoned journalist, that really gets my goat.

So, to the facts, Ms. Goldberg.

Whoopi Lie #1: In late April, when you told NYC Mayor Michael Bloomberg to “back off” with “his initiative” called Baby Friendly Hospitals, you couldn’t have been more wrong.

The Truth: The Baby Friendly Hospital initiative (BFHI), is an international effort, launched in 1991 by UNICEF and the World Health Organization, and is NOT of Mayor Bloomberg’s doing. Perhaps your producers could have Googled that to spare you the embarrassment. The Baby-Friendly Hospital Initiative works to ensure that all maternity wards provide evidence-based breastfeeding support.

FYI, support is not pressure.

There are over 19,000 baby-friendly hospitals in the world, and 140 in America. BFHI works to prevent thousands of infants in the United States from suffering from the ill effects suboptimal feeding practices. Breastfed babies have a decreased risk of diarrhea, respiratory and ear infections, and allergic skin disorders. Do you really have a problem with that?

And BTW, ASKING FOR FORMULA IF YOU WANT IT, AND BEING GIVEN IT FOR FREE WHETHER YOU WANT IT OR NOT ARE TWO DIFFERENT THINGS. ONE IS A MOTHER’S CHOICE THE OTHER IS THE END RESULT OF HOSPITALS BECOMING THE MARKETING VEHICLES FOR INFANT FORMULA COMPANIES.

Considering the health benefits of breast milk, and the cost of thousands of ER visits by infants suffering from diarrhea and ear infections, infant health IS the mayor’s business.

In fact, New York City currently only has one Baby Friendly hospital—Harlem Hospital, which is very good news because, while you have been singing Motown tunes in Nun costumes and talking to Ghosts, black babies have been dying at twice the rate of white babies—a health disparity that could be significantly reduced by more breastfeeding among black mothers, according to the CDC. Meanwhile, black women have significantly lagged in breastfeeding initiation and duration for over 40 years. Yet a recent report shows that racial disparity narrows at Baby Friendly hospitals.

Whoopi Lie #2: “Not everybody can breastfeed…If 90% of women could breastfeed, they probably would.”

Truth: Well, actually over 90% of women CAN breastfeed. In fact, there are very few conditions where a mother and her child are truly unable to breastfeed. Estimates on how many women actually can’t breastfeed vary from 1-5%, depending on how this is defined, but that means that more than 90% of women can breastfeed if they want to.

I find this mistruth particularly troubling coming from you because I’m sure that if someone said a young black girl from the projects, daughter of a teenage mother, who became one herself at 18-years-old, a former drug addict who decided to take on a Jewish name to pursue her acting dream in Hollywood, CAN’T become a success, I assume you would be very upset. If someone said a black woman who doesn’t play the “beauty” game CAN’T be a blockbuster movie star you would whip out the long line of expletives in a heartbeat. And rightly so.

Yet, with all the “Can’t” that you have overcome in your life, you seem so quick to surmise what most women can’t do. And be wrong and strong about it. Shame on you.

All of that leads me to believe that there is something more personal going on with your ardent fervor against supporting women who want to breastfeed and making sure that decision isn’t clouded by commercial interests. Because, is that really so wrong?

Did something painful happen to you during your birth experience as an 18-year-old mother? Because your “my daughter was born with a tooth” story just doesn’t cut it—if you have gone through childbirth you know that enduring some temporary discomfort for the sake of your child is often par for the course of motherhood. And womanhood, for that matter. Some of us would choose short-term discomfort (when done correctly breastfeeding doesn’t hurt) for the sake of our baby’s health and my baby cut teeth at four months and continued to breastfeed until he was one year.

Perhaps some of the same racial and cultural mistruths and barriers to breastfeeding that have kept black women from breastfeeding for the past 40 years have affected (or infected) your thinking too. Perhaps you are not as progressive and empowered as you think you are but just responding to years of media stereotypes and aggressive formula marketing, and “Booby Traps ™”, and generations of disconnect from our African American breastfeeding heritage.

Or your Jewish one.

Either way, it’s time for you to get your View corrected because black babies, in particular, need more breastfeeding mothers to reduce infant mortality and improve infant health and make sure more black infants make it to their first birthday. So if you want to damage the black community please stick to encouraging racist stereotypes like minstrel-like blackface, because our babies deserve better.

Perhaps you could also adjust your signature glasses just slightly above the bridge of your nose for a change, to clearly see the capitalist machine and misguided culture that has sold women the marketing line that infant formula meant empowerment and freedom (much like they sold us on shiny new appliances in the 1950′s and called us professional housewives), and then brainwashed us to believe that something made in a factory is just as good as what nature provides. But until then, your blinders and inaccuracies make you unqualified to offer any sort of “view” at all.

P.S.. I did love you in The Color Purple

“Until you do right by me, everything you even think about gonna fail!”–Celie

And these, my good people, are my sentiments exactly.