I snapped the picture below, from it’s original place — on a door in the Anthropology Department, while I was visiting school last week, since I think there are so many awesome things about it. I think it paints a pretty good portrayal of Homo neanderthalensis, which, although there is a large debate, is said to be a close cousin to Homo sapiens (that’s us!). 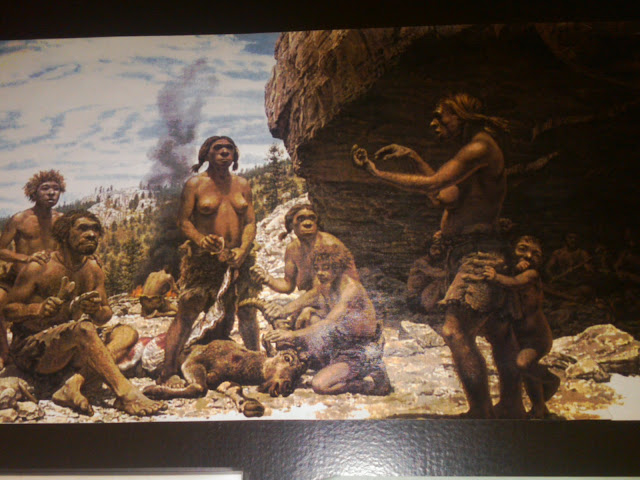 Many scientists suggest H. neanderthalensis existed alongside H. sapiens — modern Homo sapiens began to evolve about 200,000 years ago, and H. neanderthalensis in the late pleistocene 125,000 -30,000 years ago. Even though some may or may not agree with the evolutionary theory (I sometimes am not sure just exactly how much I subscribe to myself), I think this image is a perfect opportunity to provide insight on the way I often look at things.

Usually, when I think about the way we live today — foodways, gender, instinct, breastfeeding and other areas, I often times find myself comparing and maybe even fantasizing about life somewhere around this time. I think I mentally allow myself to go here because although it probably wasn’t, it seems like an ideal era. This period was long before we became infused with culture that sent us on a rapid plunge. It was before Sony Electronics began telling us we need their latest flatscreen, or everyone rushed out to buy the newest iPhone, and even before I sat here and typed this post on my macbook. Our foods weren’t genetically modified, and we didn’t subsist off of a diet of modern agriculture which is, as author Lierre Keith put it, soaked in fossil fuels and disease-laden. We actually followed our instincts back then, and many social issues that influenced our choices on discrimination, racism, class and others, didn’t exist. Breasts weren’t a source of learned sexual behavior and something for the ‘man,’ and homes meant living in a cave or a rock shelter; there was no need to purchase an extra piece of vacation property or anything else, I imagine, to make ourselves feel as if we’re fitting in. We were exceptionally healthy, and had what I imagine was an ideal reciprocal relationship with the land, plants, animals, and the environment — not built off of either one exploiting the other.

I could go on and on about this one here, but I’ll stop here since this was technically supposed to be a ‘Wordless‘ post with the image only, but, because I have to ramble a least some, morphed into ‘less words’ than I would usually write. And now it reading like a passionate novel. So I’ll just stop and leave space open for discussion. My only question is…. what the heck happened?